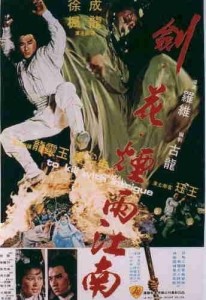 Jackie’s character is a strange one in To Kill With Intrigue, and as usual for the Lo Wei films, it doesn’t fit his personality at all. Jackie plays something of a callous, cocky, martial arts ruffian, someone who Jimmy Wang Yu would play really well. But Jackie just seems like a punk kid who needs a good kick in the ass. He eventually does get that kick via a couple of the film’s mentor characters, but if that makes the film sound redemptive and interesting, it’s not. You could potentially draw these things out of the film, but the film itself is not concerned with providing them at all. It’s a Mad Libs Jackie Chan movie; they supply the raw elements, you supply the emotional weight.

Just to give you an idea of how convoluted this story is, I needed to stop halfway through the movie so that I could write down everything that happened up to that point. Then I went back and re-watched scenes to fill in the gaps so I would be able to watch the rest of the movie without being completely against the ropes the whole time. If I didn’t do this, there would’ve been no way to follow the story. It actually makes sense when you stop to break it down, but so much of it is pointless and added on to inject more of that “intrigue.” Someone should’ve told Lo Wei that a film can only take so much intrigue, even a Lo Wei wuxia film, which are always notably chock full of martial intrigue. I’m willing to forgive a movie many things, including a bad plot, but the problem with To Kill With Intrigue is that so much of it is that bad plot, so even the good bits are completely dwarfed by all the heightened melodrama and intrigue. 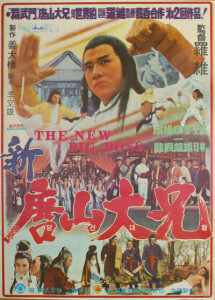 As for these “good bits” I refer to, they are definitely the fights. They aren’t stellar by any means, but they often feature super fun wuxia-tastic feats of jumping and/or precision. It’s a shame some of these really well-done moments are in this movie, because that means that most wuxia fans will never see them, as they will wisely stay away from the film. Jackie’s choreography was really maturing at this point and here you can see him consistently testing the limits of Lo Wei’s authoritative control. Lo doesn’t let things get too out of hand, but in brief moments Jackie is almost allowed to be Jackie, jumping, rolling and creating unique moments within the fights. Between Jackie’s inherent acrobatic ability and some well-edited bits of reverse filmmaking, Jackie seems to be an absolutely incredible wuxia hero at times in To Kill With Intrigue. I say “at times” because there are other times when Jackie is purposefully portrayed as a lesser fighter because it serves whatever story beat we’re being fed for that specific 90 seconds of the movie. There are quite a few good fights, though, and the final battle is a very entertaining, extended one-on-one battle.

But honestly, To Kill With Intrigue isn’t as horrible as it might sound, at least to me. I thoroughly enjoyed myself, and even though the story is way too complicated, I still had a lot of fun watching the film. The fights are exciting and well-choreographed, and are better than the standard level of wuxia fights that I’m used to seeing. That all being said, I would only recommend this one to hardcore wuxia or Jackie fans, as pretty much everyone else will most likely hate this film. When it got really boring, I found myself thinking about how much better Shaolin Wooden Men was, so maybe if you find yourself watching this one you can use that method to save your sanity too.

Next up in this chronological journey through the films of Jackie Chan: it’s Jackie’s breakout hit film directed by Yuen Woo-Ping, 1978’s Snake in the Eagle’s Shadow! Awwwwww yeah! It should be noted that this was not the next film Jackie made after To Kill With Intrigue. It was the next released, though, and that’s how we do it ’round here! More info in the review to come!