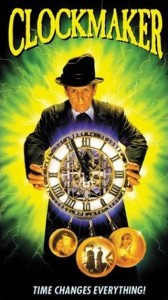 This is one of those movies I would’ve loved as a kid. Kids nowadays, probably not so much as their brains have long since rotted away with a steady diet of “Computer Generated Images” or CGI. Oh, sorry, thought I was in 1998. My point is that it’s for a select group of kids. And if your kid takes to this now, it’s probably safe to say there’s a B-Movie fan just waiting to get out of their shell. Keep a copy of Troll 2 handy for when they get older, just in case.

But why did I love it, you ask? Well, it was initially slow going. I’m not too fond of kids, and the kids here were pretty annoying at first. But as soon as they stepped inside the old man’s apartment, I knew I was in for something slightly different. Huge pendulums swung past the kids’ faces, threatening to clobber them something fierce. Soon after one of the kids disappears, and the other two decide he must have slipped out some other way. They venture out of the apartment to find that the world they remember is but a memory, as they are now in a twisted version of the future where people have bio-implants, TVs constantly play static and giant tubes (probably for the Internet) are coming out of everything.

And this was where I truly fell in love. My sci-fi brain just couldn’t fight something as inherently fun as an alternate future, especially one rendered via the low-budget methods of Full Moon at the height of their powers. You can call it whatever you like, but I thought it was extremely well done for what it was. And what is it? It’s kind of a rip-off of the entire Back to the Future trilogy boiled down to one movie. Kind of. The story is completely different, but a lot of similar elements and even a joke or two are repurposed, such as calling someone by the name on their clothes. Here it was Polly, Polly Esther, and yes, I laughed pretty big at that. Clockmaker held me in the palm of its hand.

But does this quasi-stealing diminish the fun? Not one bit. I’m a huge fan of Back to the Future, and while I never want “them” to make another sequel or remake any of them, I’ve always lamented that there weren’t more fun time travel movies like that. And now I found one! Except this one isn’t bound down by logic because it’s a low-budget movie! So there are all kinds of stuff thrown in just in the name of fun! What’s not to like? 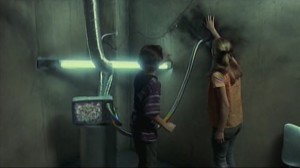 Rest assured, naysayers will definitely find much not to like. Most of the actors have their dialogue dubbed (like pretty much all Full Moon films from this era) because this was shot in Romania and they used local actors with thick, unintelligible accents. The special FX are notably bad, and the clockwork scene when they enter the old man’s apartment looks more like a local carnival funhouse than a dangerous, clock-based security system. I’d say you’re missing the point to be bothered by these facts, but they are what they are if you’re the type to venture down that path. But this film won me over almost immediately so nothing in it really bothered me. And in fact, I loved that makeshift clockwork funhouse and I don’t care who knows it!

Surprisingly, Clockmaker was a blast and I really hope that some fun-loving, imaginative kids get ahold of this through RedBox. It’s a far sight from the films of today, even the low-budget ones, but few modern films can match Clockmaker‘s pure fun. I loved Clockmaker, so get down to your local RedBox and check it out under the title Timekeeper! You might regret it!

Here’s the trailer, which is a video of a video playing the trailer in a small window. Very strange indeed. Also: if you plan on watching the film, the trailer basically goes through the entire plot of the movie! You’ve been warned!

Next week on Full Moon Tuesday, I’ll be going deep into the VHS vaults to dig up 1987’s The Caller featuring Malcolm McDowell! And I just found out that it’s from the director of Hercules in New York! Expectations just went up!