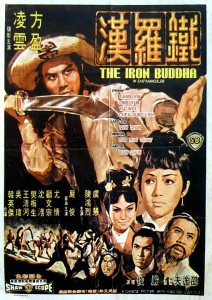 The Iron Buddha has three major strengths working for it. First, the direction from Yen Chun is full of vigor and lots of exciting camerawork. He’s had two films in the series previously (That Man in Chang-An & That Fiery Girl… and with those titles I’m surprised this isn’t called That Iron Buddha), and this is by far the best of the three. By this point, Yen was nearing the end of his directing career (which started in 1953), so he was by no means a newcomer, but it seems that action cinema took a little while to grow on him. Unlike many of the Shaw directors, though, Yen shows marked improvement between films and I lament the fact that he only made one more action picture with the Shaw Brothers before retiring shortly thereafter.

But good direction is wasted in a martial arts film without excellent choreography, and that’s where the second strength of The Iron Buddha lies. Co-choreographed by Han Kuo and Sammo Hung, Sammo’s influence burns bright throughout the entire film. This is the second of three choreographing efforts for Han Kuo, and based off of his solo gig on The Golden Knight, I have to attribute most, if not all, of the successes to Sammo. Anyway, the fights here are nothing that will have you singing their praises for years to come, but they’re fun. And they’re inventive. And they’re loads better than the stuff you usually see in the non-Chang Cheh films. This was Sammo’s last film with the Shaw Brothers before he defected with Lo Wei and started making pictures for the new upstart studio, Golden Harvest, and it’s definitely an impressive one.

Which brings me to the third strength of The Iron Buddha: the two excellent performances by our leads, Ling Yun and Wong Chung-Shun. At this time, Ling Yun was just getting into the action game. He previously starred in the lackluster and disappointing Twin Blades of Doom, turning in an average and unremarkable performance. Here he lights up the screen with a fun, heartfelt portrayal a man on a quest for revenge. His character isn’t always as bright as he should be — he gets duped multiple times during the film — but this isn’t Ling’s fault, and this aspect of the character actually pays off rather well as the final battle is about to begin. Ling plays a perfect foil for our over-the-top and truly dastardly villain Wong Chung-Shun, one of the most dependable and awesome actors in the Shaw stable during this era.

And if that wasn’t enough to sell you on this movie: the opening 30 minutes reach heights of brotherly violence that are near Chang Cheh levels. In the scene when Wong Chung-Shun confronts the students, after he tells them that they will die a slow, painful death from his poison sword, the students do something I never saw coming. They take their own swords and violently thrust them into their stomachs, the elder student even stabbing a couple of the less courageous, newer students so they won’t have to suffer. The last few films have been rather light on the bloody violence, and I forgot just how gnarly some of these can get.

The Iron Buddha isn’t the type of movie that will win awards or set the genre world on fire, but it will entertain at a near-constant pace. I think if the heroic lead were a more well-known actor, such as Lo Lieh or Chang Yi, this would be a more well-known movie, but as it is it’s a great, under-the-radar gem. Definitely recommended to like-minded fans.

Next up in this chronological jaunt through the Shaw Brothers Martial Arts catalog is Jimmy Wang Yu’s The Chinese Boxer! This is it: the first film in history to feature predominantly unarmed combat, thus kicking (and punching) off the kung fu genre! It wouldn’t really take hold until Bruce Lee burst onto the scene in 1971, but The Chinese Boxer is definitely a film I’ve been eagerly awaiting!