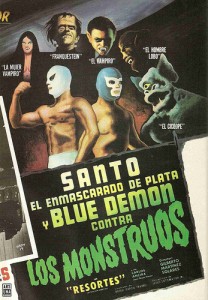 The Vampire, who is a dead-ringer for Tom Smothers, his specialty is pausing from high areas before leaping and screaming YEEEEE!! The Mummy is pretty much just an old unkempt guy in ace bandages. The Wolf Man (Referred to in the credits as El Hombre Lobo) is a pretty scary looking guy, not in the sense of “Oh my God it’s the Wolf Man” but more of “Oh my God this hairy vagrant is eyeing my 9 year-old daughter with carnal intent”. Frankenstein is hilarious, not only for having a head that is completely out of proportion to the rest of his body, but because he sports, and I shit you not, a la raza goatee straight out of the back pages of Low Rider magazine. The Cyclops is my personal favorite because he is pretty much an eight-foot-tall tower of crumbling foam latex whose only real shot at glory is the huge, glowing orange eye on top of his head. He growls menacingly at times, but ultimately he just looks like the eye of Sauron taking a shit. Finally there are The Vampire Women, who are basically a couple of curvy heinas in underwear that lure Santo into the woods for one of the film’s many ambush scenes.

Santo and Blue Demon vs. The Monsters sports so many moments of pure insanity that virtually any frozen frame can be certified as a surrealistic masterpiece that would have Salvador Dali clawing the walls with madness. Every scene in the film basically ends when Santo gets ambushed by Evil Blue Demon, the monsters, or both. And frankly, I don’t give a shit. You can’t give the audience too much of a good thing and the filmmakers were smart enough to realize this.

My personal favorite scene was when, after a particularly nasty ambush on Santo and his girlfriend, Santo’s manager informs him that a new wrestler who goes by the name of “The Vampire” is talking crazy shit and if he doesn’t meet the challenge it could damage his reputation. Santo, for the sake of this fantastic scene, falls for the obvious ruse and accepts the challenge. Soon after, he finds himself matched up against the vampire, now ditching his cape for a luchador mask! The battle is even more fantastic than you can imagine in all of its overcranked glory, with both Santo and the vampire flying all over the ring just beating the hell out of each other with spinning leg locks, backbreakers, and body slams. As if the moment could not get any more insane, the vampire spots a woman wearing a crucifix, freaks out, changes into a bat and flies away! The crowd scrambles away in terror, and amidst the pandemonium Evil Blue Demon and the army of monsters crawl out of the woodwork and into the ring for an absolute orgy of violence that has to be seen to be truly appreciated.

Things begin to look pretty dire and when Santo’s brother in law delivers the classic line “We may have no way out, Santo. Not even the rays of the electronic gun could hurt him.” You know something has to be done, and fast. Santo’s one-man siege of Dr. Hadler’s castle has The Man in the Silver Mask saving the real Blue Demon and the two laying waste to the mad doctor and his army of monsters.

I don’t know about you, but it’s comforting to me knowing that somewhere out there people are committing weird shit like this to celluloid. The world is a better place where movies like these, with virtually no budget, and no technical expertise offer an alternative to the next Hollywood blockbuster for a small, but rabid group of degenerate movie buffs. Santo, the Man in the Silver Mask passed away in 1984, but I’d like to think Santo the Legend is still out there, roaming among the wild agave, looking down from the dusty hillsides of Mexico.

6 thoughts on “Uncle Jasper reviews: Santo and Blue Demon vs. The Monsters (1969)”