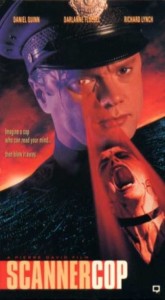 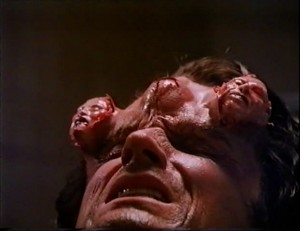 When the dust settles and the main storyline begins, we’re following Sam, a newly minted cop on his first beat. He’s a scanner cop, but he’s doing his best to control himself from exploding anyone’s head… but don’t worry, he does. Anyway, someone is drugging and brainwashing the fine people of Los Angeles so that every time they see a cop, they see their worst fears realized and immediately turn to violence. Cops are dropping like flies and it’s up to Sam, the scanner cop to take down the evil bastard behind it all. It’s a great premise and it’s actually put together rather well here, making for a fine low-budget horror/suspense film.

I can’t wait any longer: Buechler’s FX in this are fucking awesome. In the previous films, you might get one or two intense moments when the scanner focuses on a person and almost makes their head explode. The fact that you know there’s a head explosion coming at some point always makes these scenes incredibly tense for me. I’m literally rocking back and forth in my seat from the sheer intensity of the scene, and Scanner Cop is filled with shit like that. In each scene, the person’s facial blood vessels engorge themselves and turn blue, sometimes accompanied by bulging tumors that spring up all over their faces. In addition to these moments, many of the drug-induced hallucinations conjure up giant insects or decomposed walking corpses. And don’t forget the heads coming out the dude’s forehead at the beginning. The FX work is plentiful and glorious; I’ll never understand why Buechler never became a giant in the industry.

Oh, but wait you say, what about the head explosion? As you can see from the gif, Scanner Cop features yet another awesome head explosion. This one is especially interesting as the scanner cop explodes the girl’s head while he’s scanning her mind and locked in her dream. So he’s actually exploding her metaphysical head (or her mind, if you prefer) while in the real world everything is hunky dory (except for the fact that she’s dead… but she’s a bad person so don’t feel bad). Scanner Cop kinda has another head explosion too. To tell the specifics would be too much, but suffice it to say that the ending of the film once again had me howling and giggling with glee.

There’s also a few extended scenes in a mental hospital that are definitely of note. Most mental hospital scenes reflect a calmness, or an order to the day with pills in paper cups and patients calmly watching The Price is Right. At the Chatsworth Mental Institute, they don’t give a fuck. Hallways are filled with writhing lunatics, and men are given huge jolts of electro-shock therapy with the door wide open for anyone wandering by to observe. My favorite was the doctor’s method for administering a shot to his roughly 10-year-old patient. First, he clearly announces that he wants to perform some experiments on the subject and then states that he’s about to inject radioactive glucose to facilitate these experiments. Then he holds the gigantic syringe right in the patient’s face and says, “Easy, boy. I’m just going to inject you with this harmless dye.” I don’t know about you, but when I inject radioactive glucose into children, I always try to divert their attention away from the fact that I’m going to inject radioactive glucose into them. He’s the professional, though, so maybe I should trust him.

Scanner Cop may not officially be called Scanners IV, but it features everything you could ever want in a Scanners film wrapped in an LAPD tortilla. The only thing that doesn’t return is the scene where the scanner regulates someone’s heartbeat, but really how many times can you successfully work that into a script and not make it seem forced? The correct answer is three times, as all previous Scanners films featured it in new and exciting ways. Hopefully it makes its welcome return in Scanner Cop II!

This has never been released to DVD in the US, so get your hunting gear on and track this fucker down. It’s well worth any genre fan’s time, especially if you enjoyed the previous Scanners films. I’d be remiss not to mention that it does get rather slow at times, but in a film with this much low-budget greatness throughout, I can’t really count that as much of a knock against the film overall. Highly recommended.