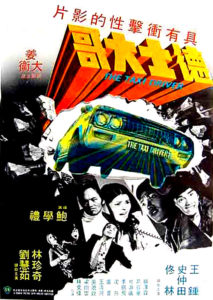 Also renting a room from Chen’s landlady are Ma Sheung Loong (Shut Chung-Tin), Li Hung (Yeung Chak-Lam) and Kwok Wan (Wu Chi-Chin), and they are definitely not trying to get ahead by honest means. Their plan to better themselves involves planning a bank robbery, and when the need for a getaway driver arises their first thought is Chen Guang. This situation provides the main conflict of the film, but due to the structure it’s not really a pressing concern for a good part of the movie. It’s presented relatively early, too, so if I were to criticize the movie for anything, it would be this laid-back approach to its plot. That being said, I really enjoyed all the slice-of-life taxi driver stuff that occurs around the plot, so it wasn’t much of an issue for me.

The martial arts content is somewhat limited in The Taxi Driver, in part because there just isn’t a lot of martial arts woven into the day-to-day grind of being a taxi driver. A few instances naturally occur, but it’s clear that Pao Hsueh-Li was attempting more of a drama with martial arts than a straight-up kung fu movie. As the film progresses we are treated to a big fight at night with David Chiang and Wong Chung taking on a number of rivals. There have been a few very similarly staged fights in previous modern Shaw films (The Delinquent and Police Force come to mind), but this one is definitely the best of the bunch (perhaps mostly due to David Chiang’s involvement and my general affection for him). The choreography was handled by the capable Lau Kar-Wing & Chan Chuen, and they do a rock solid job of keeping the movements tight and flowing.

By far the best scene in the film, though, is the planned bank robbery. Robbing a bank is something that is seen in a ton of movies, and they all have a tendency of following similar trajectories and hitting a lot of cliches. I understand this, and the scene in The Taxi Driver does a lot of this, too, but Pao filmed the entire scene with nothing but dutch angles. It immediately gives it a unique look from the rest of the movie, and it communicates the energy of the chaotic, reckless criminals perfectly. Later when we are shown the aftermath of the robbery, with reporters interviewing the clerks and customers, the camerawork is all handheld and pushing through people. Again, it’s a wonderful visual to communicate the fragile, shaken nature of these people we’re watching and it really elevates the rest of the movie.

The Taxi Driver surprised me and I look forward to watching it again. I’ve long felt that Pao Hseuh-Li had a lot of potential, but until this film I can’t say that any of his solo films really knocked me out (he is co-director on many fantastic films with Chang Cheh and Wu Ma). If you enjoy socially aware films set in modern Hong Kong (of the ’70s) then I definitely recommend you check out The Taxi Driver.

Next up in this chronological journey through the Shaw Brothers Martial Arts catalog is Chang Cheh & Sun Chung’s The Bloody Escape! See ya then!