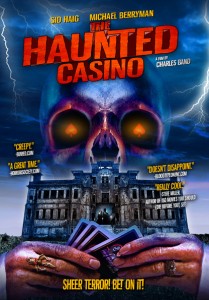 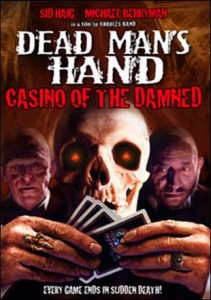 The first two-thirds of the movie are dedicated to the talky-talk I mentioned above, and while this is somewhat infuriating to a horror fan, by this point I’m totally aware of what I’m getting into when I sit down with a Full Moon film. It helps that the film’s script isn’t too bad, and the characters are defined and likable enough to watch. But damn it, we came for the ghosts that inhabit this haunted casino, and while they do far less than you’d like them to do, their appearance about halfway through the film elevates it tremendously.

Sig Haig is great as the ghostly leader of the group, but despite his name being very prominent on the advertising, he’s only in a couple of scenes. Michael Berryman fares even worse, as he’s in the same scenes with Haig, but he only gets a few quick lines to say and never gets any chance to shine. Jessica Morris, who would later go on to play the lead in Full Moon’s most recent film The Dead Want Women, appears as a slutty slot girl who seduces one of the guys. There’s also a couple of dealer ghosts who start up games of chance where the stakes are much more severe than usual. It’s kind of like a low-budget The Shining, only set in an old casino instead of a hotel and minus the quality filmmaking, the descending-into-batshit-madness performance from Nicholson, and the pure terror. Other than that, they’re exactly the same.

The human cast of heroes/victims is also fairly well acted by the lot of young actors Charles Band put together. It seems like Robin Sydney is in every Full Moon movie of the last few years, and here she’s one of the leads. She does well for the most part, with only her short moments of rage and profanity coming off as forced and obviously betraying her acting. Everyone else is good as well, with Kristyn Green and Lily Rains standing out from the crowd a little more than the others.

There’s a surprising amount of gore for a Full Moon movie, which is to say that there is actually some gore. One scene involving a maintenance man getting his face ripped off is especially good, but the best is when Jessica Morris changes into a hideous ghoul with slot-machine eyes. And let’s not forget our old friend dismemberment who delivers a couple of wonderful fonts of spraying blood and severed limbs.

Not much happens for most of The Haunted Casino, but it’s remarkably more watchable then most because of its relatively well-written script featuring such gems of conversation as this:

“What’s wrong? I thought you liked me.”
“That was before I found out you were a dead chick.”

All kidding aside, it is well-written for a low-budget film, and the production design ekes out every last penny from the meager budget. It looks good, it features Sid Haig, and I’d definitely recommend it to Full Moon fans if you’re looking for a cheap horror movie to fill your night’s entertainment. On the other hand, if you’re not so familiar with Full Moon’s output, I’d start somewhere else. Because of this, I’m a little at a loss to explain why this is one of the few Full Moon titles to make it into Redbox kiosks, but it does make it infinitely more accessible to those looking for some interesting low-budget fare.

Next time in I’ll be cracking into Full Moon’s Killjoy series! Oh yeah!