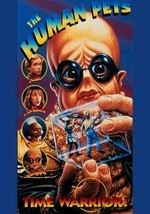 OK, I hear you, I’m being too harsh to expect Charles Band and company to make a direct sequel that actually picks up right where the story left off. This is true, and for the most part it does continue on rather nicely if I throw away my preconceived notions that it should open (or at least reference) the dino-riding scene with Josh Kirby. In any case, the first film ends on the eve of the climactic battle and about half of this film is said battle. There’s a bit of a run up, but most of it is the battle. It ranges from slingshots on the castle’s ramparts to dino-knights jousting for the fate of the land and the supremacy of the throne. Your mileage may vary, but I greatly enjoyed seeing two stop-motion dinosaurs (complete with stop-motion knights atop them) fighting it out to the death.

After a bit of running, our heroes find themselves back at their time capsule, hoping to continue their hunt through the universe for the Nullifier pieces. Before they can lift off though, the evil Dr. Zoetrope busts in with his time armor set to “Kick Ass” and a quick laser battle ensues. And then right when all seems lost, the screen quickly fades to black and fades back in on a desert landscape with the pod and our heroes laying on the ground. They are quickly scooped up by a giant hand! WTF just happened? I rewound the film to see if I had zoned out and missed some important plot point or time jump or anything that might explain the sudden shift in location, but no, it really just fades from one moment to the next. Full Moon has always been fairly ballsy with their plot structures, but I’ve never seen them use such a jarring change of scenes before.

The Josh Kirby character is nothing special, but perhaps if I was a small child I would think otherwise. He’s definitely presented as the more-than-capable hero, but it’s funny and pretty unbelievable as he’s a previously bullied and interminably shy fourteen-year-old kid in his own time. Yet we are supposed to believe that after one sword-fighting lesson with a broadsword, he is not only capable of wielding one in battle, but that he can handily defeat castle guards who have more than likely spent hours upon hours training their sword hands. I know these types of disposable extras always stay up too late at night and come to work with hangovers (thus explaining their inevitably shitty fighting), but even such a guard on his worst day should be able to beat a plucky kid who just started wielding a sword that afternoon.

There is a scene later on in the film that follows a similar trajectory, albeit a much more believable one within the film’s logic. Josh Kirby finds himself in a situation where the only weapon at his disposal is a bicycle. Not just any bicycle, but a mountain bike! Since this is the mid-90s, mountain bikes were the shit and therefore I will accept people doing things far beyond their capabilities or the laws of physics because of the collected goodwill of the people in the general direction of mountain bikes. Josh mounts the bike (remember from the first film that he’s all about bike racing) and uses it to the best of his ability to thwart the evildoer. He does so with such confidence and ease that either the villain is a pushover or Josh Kirby is one bad motherfucker on a bike. I’m pretty sure it’s the latter.

In the final moments of the film, it again pulls the WTF lever. In one moment Josh Kirby is saved and all is well, but in the next shot he’s outside the time pod careening through the tubes of time! Huh? How did that happen? I guess I’ll have to watch the third film to find out! Josh Kirby… Time Warrior: Chapter 2, Human Pets overstays its welcome and takes too long to actually get to the human pets part of the film, but it still remains fairly enjoyable throughout. It’s not nearly as fun as Part 1, but it’s still bound to entertain anyone that enjoyed the first film.

Next week, it’s the third installment: Josh Kirby… Time Warrior: Chapter 3, Trapped on Toyworld! This one looks disturbing as FUCK. The things I do for this website.