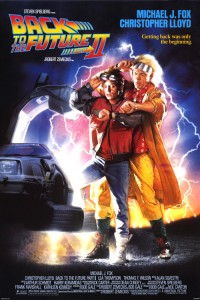 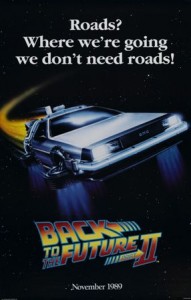 If Back to the Future is simple in its complexity, Back to the Future Part II is complex in its complexity. The plot weaves through different years and alternate timelines, showing us in vivid detail why monkeying around with a time machine is a bad idea. All those space-time continuum rifts and paradoxes Doc Brown talks about in the first film are realized here and it makes the film a much more varied spectacle than the first film was. Obviously the budget is a lot higher as well, and the number of FX shots is through the roof this time around.

Speaking of the FX, they are incredible. Still. Some of the shots involving the flying cars are so seamlessly done that I doubt they will ever look bad to future audiences, no matter what year it is. And let’s not forget the lightning FX. I’ve said it before and I’ll say it again, lightning in 80s movies is always fucking awesome looking and Back to the Future probably features the greatest example of these killer lightning FX. The set design and dressing of the standard Hill Valley set to reflect the various eras represented in the film is also outstanding.

Thomas F. Wilson does a spectacular job of playing Biff in his many forms, creating four distinct versions of the character for the film (five if you count the Auto Detailing Biff from the end of Part 1). Michael J. Fox also pulls off a number of McFly family members very well, showing that both young actors were promising, solid talents. Fox obviously continued on to great success cut short by illness, but Wilson never really caught on. Looking through his IMDB page, he’s done a ton of TV and voice work, but I look forward to the day when a director thinking outside the box (ala Tarantino) offers him another career-defining film role. 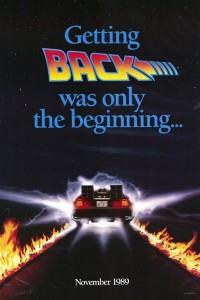 As I stated in the Back to the Future review, these films never cease to amaze me at how well plotted they are. This film in particular is especially well put together, as it creates a story that fits and makes sense within the world created in the original, while also going back and weaving itself right into the plot of the first film’s final act. This creates an interesting situation for viewers who are intensely familiar with the original. As events play out, you know (just like Marty does) how everything in the background will play out, and Marty must find a way to avoid another paradox while trying to save the day.

It’s not all shiny new 4×4 trucks though, there are a few problems with Back to the Future Part II. Most of them stem from the plot. Wha’? Didn’t I just say that I was impressed with the film’s plotting? I did, but amidst the greatness, there are a couple of moments that only occur to specifically move the story along. This series is fantastic when Marty gets wrapped up in the moment and falls into an impossible situation, only to realize it just after. This creates a struggle that Marty must overcome, despite its seemingly impossible nature. Back to the Future Part II has loads of stuff like that, but it also has moments where the writing is very transparent. Things like taking Jennifer along to the future, only to zap her unconscious and leave her in an alley, thus setting up the chain reaction that propels the film forward. I’m willing to forgive the film this because it’s overall incredibly enjoyable, but I wish they could have thought of something slightly less banal. There’s another of these moments that occurs late in the film where Doc inexplicably continues to hover around in the lightning storm when he just as easily could have landed and hung out with Marty on the ground. I know, I know– then we wouldn’t have a third film, but it is pretty ridiculous.

Ridiculous plot aside, Back to the Future Part II is a fantastic movie and a fantastic sequel to one of my favorite films. It succeeds in following up a classic by ratcheting up the stakes and giving the audience a heavy helping of visually exciting and quite fun paradox antics. Biff yells a little too much, but I can deal with it in a film this intoxicating. If you somehow never saw Back to the Future Part II, then definitely check it out!