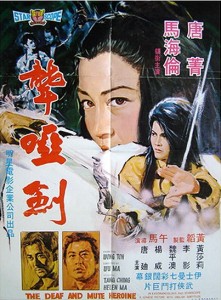 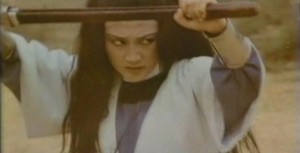 Thankfully, the action in this film is quite good. Simon Chui Yee-Ang and Chui Chung-Hok were responsible for the action, and they definitely earned their paycheck here. This was their first work together, and they later went on to choreograph many fantastic films such as Duel for Gold, The Devil’s Mirror and The Black Tavern. The initial fights — probably everything in the first hour — aren’t anything too special. They entertain and the choreography is good (and perhaps a bit faster than a lot of other films of this era), but they’re missing that extra something special to make them memorable.

So when the finale impresses as much as it does, it really took me by surprise. I knew there would be an end fight (duh!), and I knew it’d be fun judging from what had gone before, but I was so unprepared for what played out. Up to this point, the film had been peppered with small wuxia feats ranging from the Deaf Mute Heroine grabbing an arrow from the air and then spitting it into an enemy’s forehead, to a character opening a door by throwing a cup (that then boomerangs back into his hand). But the finale contains tons and tons of these kinds of wuxia moments! The Deaf Mute Heroine flies upside down to avoid huge bowls of fabric dye thrown at her, she flips backwards onto a rooftop out of harm’s way, she even goes through a portion of the fight with an enemy strapped to her back so no one can sneak up and stab her in the back! I was in heaven during this finale, and I can’t imagine any wuxia fan being any different. 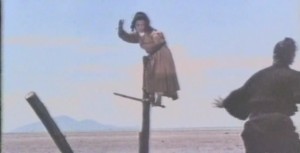 Deaf and Mute Heroine may start out relatively tame and standard, but it builds into one of the most entertaining wuxia films of the era. The story is incredibly threadbare, but thankfully the plotting moves quickly and the action is plentiful, bloody and fun. Wu Ma has crafted a film that feels reminiscent of the Chang Cheh spirit, yet ironically also features one of the best female battles of all time between Helen Ma Hoi-Lun & Shirley Wong Sa-Lee. It’s really a shame this one is so hard to get ahold of; wuxia fans definitely need this one in their lives. A genre legend, if only people could see it!

A huge step up from Wu Ma’s first film as a director, Wrath of the Sword, too.

Next up in this chronological journey through the Shaw Brothers Martial Arts catalog: I’m still doing non-Shaw films. WTF, right? Well, before I get back to business and start the Shaw films of 1973, I’ll be checking out a couple of non-Shaw 1972 films that made the Hong Kong box office Top 10 for that year. First up is The Good and the Bad, directed by Ng See-Yuen! See ya then! (Hopefully sooner rather than later.)