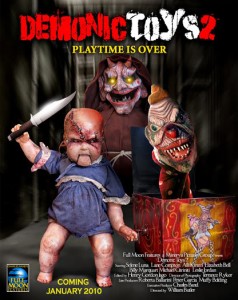 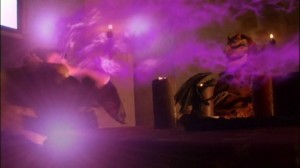 Ditching the entire “demonic toys need blood to revive” major plot point of the series, the toys are in the custody of Dr. Lorca (Michael Citriniti). You might remember the name, as he was the crazy biological collector from 1997’s Hideous!, one of my favorite Full Moon movies. Lorca brings the toys and an assortment of characters to an Italian castle, where a graduate student has uncovered an ancient toy, Divoletto, that Dr. Lorca is very interested in. You’ll notice I said castle. That’s right, folks, Full Moon once again sets their film within a castle! One of these days I’m going to have to count up all the Full Moon castle films. It’s well into the double digits. Anyway, Divoletto wakes up the Demonic Toys and they join forces to take out a bunch of these argumentative and betraying humans. Bet ya didn’t see that coming.

This would be all well and good if the death scenes were well shot with quality FX. Instead, there’s a mixture of low-quality CG blood and the old “I’m screaming in pain but I clearly only have a small bit of fake blood smeared on my neck.” Replace neck with any body part and you’ve got the gore formula for the film. There’s a great moment where someone’s hand is bitten by Jack Attack and it cuts to the most obvious “blood smearing” in recent memory. Who gives a shit though, it’s a Full Moon movie in 2010 so for those watching you should already know what you’re getting into. It’s not like people can randomly stumble upon these films in a video store anymore. On the positive, the modern Full Moon requisite CG fog & light rays actually look great and fit in well with the castle surroundings and the characters. In some movies purple fog just doesn’t cut it, but it works well in Demonic Toys 2. 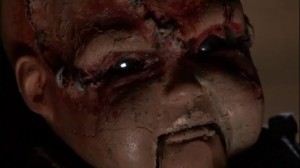 The acting is pretty mediocre across the board, with Michael Citriniti remaining fun in the role of Dr. Lorca, but he’s considerably subdued from what his character was in Hideous! Obviously he’s older and potentially wiser, but I miss the crazy factor of 10. Perhaps it’s because he doesn’t have Mel Johnson Jr. (or anyone worthwhile) to play off of in this film. As usual there aren’t any memorable new characters in this, except for the aging Southern queen, Mr. Butterfield (Leslie Jordan). He’s got some funny lines, but (SPOILERS!) he dies fairly early on in a gruesome, if computer-generated, death scene. The new toy Divoletto is pretty good, but it struck me as something that would be much more at home within the Puppet Master universe. The puppets themselves are pretty good quality, but Baby Oopsy Daisy’s face looks like it could have used another couple of passes with the sandpaper or whatever they use to smooth out the imperfections. Seriously, some of the chunks coming off his face were bigger than a four-door Yugo. In all fairness, he had his head exploded at the end of the first film, so any facial imperfections can be easily explained away with the series mythology.

By the end of the film, it’s all a bit tedious, boring and clichéd. If you’ve watched a lot of horror films, you’ve seen it all before. The production quality is surprisingly high for what is obviously a very low-budget film, so the film is a lot nicer looking than you’d expect, but it’s not nearly enough to save this one. This is a moderately uninspired offering from Full Moon and one for big fans and completionists only. Anyone who loved Demonic Toys will be sorely disappointed with the second film, as it’s nothing more than yet another “people stuck in a castle” film from a company that has an entire warehouse full of them.

Next week, I’ll be checking out the final (as of now) Puppet Master film, 2010’s Puppet Master: Axis of Evil!