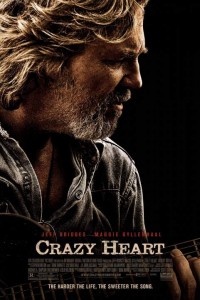 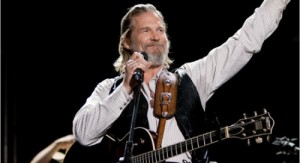 A good portion of my enjoyment of this film hinges on the fact that I love the brand of country music they’re portraying here. Real, honest, outlaw country, the kind made famous by the likes of Willie Nelson, Waylon Jennings and Johnny Cash. Jeff Bridges perfectly captures the essence necessary to pull off this type of character and he makes it look natural and easy. He also handles the singing duties beautifully. There is never a time when you don’t believe that Bridges is Bad Blake, never a scene that rips the curtain from the facade. He is helped greatly by having a wonderful batch of Bad Blake songs to sing, most co-written by the always impressive T-Bone Burnett. The man knows how to write a song and the songs of Crazy Heart are some of my favorites of his. As Bridges says in the film, the best songs sound like you’ve heard them before, and any of these songs could have been lost gems from one of country’s greats. That being said, my favorite song from Crazy Heart — Fallin’ and Flyin’ — wasn’t written at all by T-Bone. I found the Oscar-winning song The Weary Kind to be one of the weaker songs, but that might have been because of how it was presented in the film, raising my expectations. In addition to the originals, the soundtrack is also peppered with genre standouts from artists such as Townes Van Zandt, Buck Owens and Lightnin’ Hopkins. 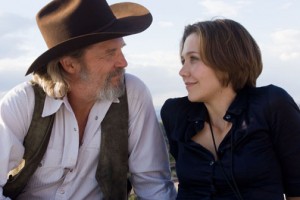 The only thing holding the film back is its slightly formulaic story that doesn’t surprise much. Valid comparisons have been made to The Wrestler, but don’t let that discourage you. As much as I enjoyed The Wrestler, Crazy Heart is a much stronger film and has a completely different tone. Both films are variations on the same theme, so if you enjoy that sort of thing you’re in luck. A good double-feature pairing resulting in lengthy discussions over 2 a.m. coffee at Denny’s. The routine story isn’t a huge problem though, as watching Jeff Bridges do his thing was more than enough to keep me interested in the story. To be fair though, I thought the film was heading one way and it ended up going slightly different, so I guess I can’t fault it too much for not surprising. It does drags a bit here and there, but not enough to be a major factor. Surprisingly, the child in the film (Jack Nation) was good and didn’t annoy me. So often kids in films ham it up for cheap laughs and drag films down, but his character of Buddy was well-played and added a lot to the film. Also there’s a lot of music performances throughout the film, which I really enjoyed, but this could get old if you’re hating on the music.

As I said before, the film is a real treat to look at, with rich, colorful interesting shots and a host of great performances. I highly recommend this if you enjoy character driven dramas and country music.