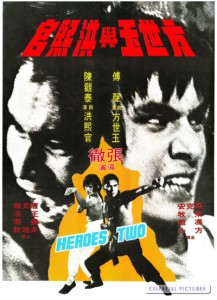 Fu Sheng was a badass on so many levels that he really deserves a blog post of his own. He oozes charisma, and casting him as Fong Sai-Yuk, who was pretty much the Rudy Ray Moore of 19th century China, was a no-brainer. He puts the Hung’s crane style on full display here and it is both fluid and effortless. Chen Kwan-Tai on the other hand is simply brutal. His take on the Hung style is a borderline savage dance of in-fighting featuring all kinds of intricate arm locks, wrist grabs, and neck punches. The way this guy completely has his way with his opponents and mows through them with machine-like precision is simply amazing. I remember first seeing him as the old guy who teaches Gordon Liu kung fu in Challenge of the Masters. I used to rent that tape from Blockbuster and watch it religiously. What kept me coming back wasn’t Gordon Liu. It was that stoic, no-nonsense master who was beating the shit out of him with the bamboo every three minutes. I always considered him one of the lesser-sung heroes of the Shaw Studios who never really got his due, both as an actor and as a martial artist. My only beef with his role in Heroes Two is that he spends half of the fucking movie chained to a wall. He completely decimates every other actor on-screen in terms of raw skill for the first 20 minutes or so, leaving you hungry for more… Then you are forced to watch him plastered up there, completely helpless for the next hour, as unworthy opponents point up and talk smack. 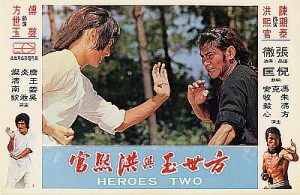 Chang Cheh, who was notorious for violence and blood, earning him the infamous handle of “The Tomato Juice Director”, actually shows a little restraint here. But towards the end, we get a decent dose of his wacky shit when the heroes are pitted against four Lamas. Every time a critical hit connects, the screen is bathed in a deep red tint. Sometimes he simply forgoes the tint altogether, literally painting the entire screen red with blood. Yes sir, Mr. Chang certainly had no qualms about letting you know damn well when some poor bastard took a death-blow. Handheld camera-work also makes a few appearances here, but as in virtually all of Chang Cheh’s films, it never feels overbearing or out of place.

Ultimately though, it’s the performances of the lead “heroes” of Heroes Two that saves it from simply being standard Shaw Bros. fare. If you’re a fan of either, I’d definitely recommend you give this one a go.