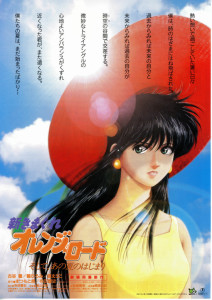 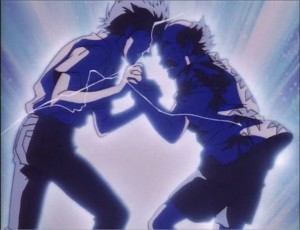 Kyosuke wakes up one morning to a phone call from his future self warning him about a car accident. You would think that a guy with psychic powers would be a little less skeptical about getting a phone call from his future self, but Kyosuke writes it off as a prank call and goes about his day — until he gets run over by a car. Now he’s stuck in a coma, but thanks to his powers his spirit has been blown three years into the future. The future version of himself (OK, it’s actually the 1994 version as the film starts in 1991) is a photo-journalist in Bosnia that has been shot. The two traumas induced his spirit to travel through time… somehow. So did the 1994 Kyosuke travel back to 1991? Of course not. That would follow something similar to logic. 1994 Kyousuke has apparently been flung into some kind of limbo. So if Kyosuke’s body is still stuck in a coma in 1991, how is he walking around and talking to people and getting drunk in 1994? Well, that’s because… well… um… look, let’s just not think about that, OK? In order to set things right, both Kyosukes need to meet each other and combine their powers. Someone clearly never watched Back to the Future.

So now 1991 Kyosuke is lost in 1994 and has no idea what’s going on. His family has moved and the coffee shop where he used to hang out with his buddies was sold to some creepy old guy. The film is filled with other shallow plot contrivances that conspire to keep Kyousuke from actually talking with the people who could just explain everything to him, because that would end the movie right there. Instead, Kyosuke conveniently (for the plot) runs into his ex-girlfriend who has been living in New York, and just came back to Japan for a short visit. This gives him a chance to completely second guess all the romantic decisions he made before. 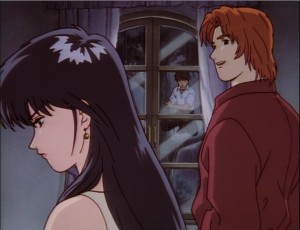 The problem is that Kyosuke already made his decisions, so he never does second guess anything. Nor does the film. The relationships are frozen in the same place they were at the start. There will be no changes, and in a movie all about the relationships between the three main characters it makes for a rather pointless film. It’s all just treading old ground. The important stuff has already been taken care of. The only tension left in the plot is Kyosuke’s quest to get back home, which apparently has a time limit before Kyosuke dies. But even this fails to provide a compelling conflict. In order to find 1994 Kyosuke, his grandfather needs to get back from his vacation in Hawaii so he can use his powers to drag 1994 Kyosuke out of limbo. So we’re still left waiting around rather than following an intense quest for survival. (One could also ask where his sisters went, and when they do show up why they aren’t helping out with their powers.)

If there is any saving grace in this film it is that it was put together with a fair amount of competence. The film flows well. It’s only when you look back and think about the plot that it all starts to fall apart. Summer’s Beginning is really just a poor attempt to revisit characters and situations that were already dealt with more effectively elsewhere. Namely in I Want to Return to That Day. Track that one down if you really want to see what makes Kimagure Orange Road special.