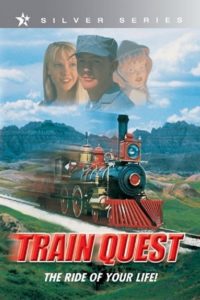 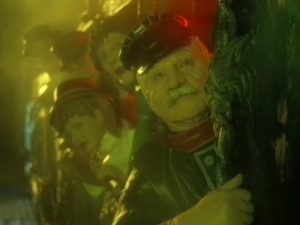 The success of this excellent premise hinges on two main points: the script keeping up the tension and excitement, and the FX work bringing the world of the film to life. Written by Charles Kephart (his only Full Moon film) and Benjamin Carr (who wrote a huge amount of Full Moon films), the script perfectly balances the oddness of the concept with the reality necessary to ground it. It’s ludicrous to believe something like this is possible, but it’s presented in a way that you want to believe in it. The script also does a great job of incrementally revealing the true nature of the situation, allowing the viewers to remain intrigued and engaged throughout the film.

As impressive as the script was to me, what really blew me away were the makeup FX that transformed regular people into living toys. The work here is probably some of the best to grace Full Moon’s catalog, if nothing else it’s miles better than the rest of the FX work being presented in Full Moon’s early 2000s work. The actors retain their ability to emote and breathe life into the characters, while also looking like they’re made of an inanimate material like plastic or wood. To further the illusion, the characters’ clothes are made of shiny plastic sheets that show lines representing the details of different articles of clothing. It’s hard to describe, and I’m not even sure if screenshots will capture their true nature, but I truly loved these FX and they do a fantastic job of selling the illusion of the film. 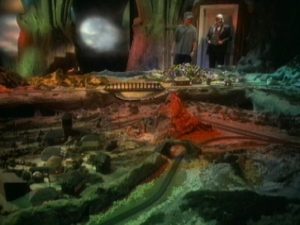 Train Quest is not without its flaws, though. There are a bunch of documentary-style interview inserts that were annoying and added little to the film (other than a few minutes to pad the slim runtime). Randomly throughout the film, we are “treated” to one of the characters talking to the camera about their internal feelings around the scene that just happened. It’s a pretty standard reality TV hallmark that in 2001 probably seemed “fresh” and “hip,” but what kills it more than anything is how the segments are edited. Instead of a single take of the monologue, each segment is composed of probably 20 takes cut together for something like a 30-second clip. It’s all from pretty much the same camera angle, too, so it’s just a series of jump cuts. I could be coming down too hard on it because I don’t generally like jump cuts, but regardless of any personal bias, it’s a choice that seems ill-conceived and distracting.

The other glaring flaw is one that will occasionally affect low-budget films, and it’s one that is very hard to see past. At times, the sound mix is so poorly put together that you can barely hear what the characters are saying to each other. More than anything else, I think it’s an issue of the music and sound effects being mixed too high, but since I’ve never done a film’s sound mix you shouldn’t necessarily trust my judgement. Hahahaha. Anyway, it’s only in spots, but it’s enough to make an impact. I have the B-Movie fortitude to power through such situations, but others might not be so dedicated to forgive this transgression.

Regardless, Train Quest is a blast. It’s short, it’s always exciting, and it does an excellent job of bringing its supernatural world to life. If you like B-Movies and you haven’t already killed your inner child, I say give Train Quest a shot! And it’s streaming on Amazon so it’s actually available!