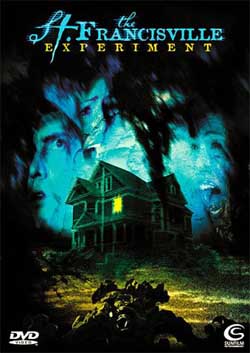 Expectations: I hate Blair Witch, so a rip-off probably isn’t much better.

That is one character’s protective mantra throughout the film and it became mine as I tried valiantly to remain conscious through the film’s running time. The funny thing though is that I actually enjoyed watching The St. Francisville Experiment for the most part, it’s just that so little happens and the characters are far too uninteresting to make for an overall pleasing film. So why would I enjoy watching something like this? Well, because I’m a cinematic masochist of course, but besides that if you buy into it just enough it’s pretty easy to have fun with it. I can imagine a group of thirteen-year-old girls renting this for a slumber party and having an absolute ball.

The premise here is simple: there’s a haunted mansion and a film producer has rounded up four college students to go in with cameras and try to document some ghost activity. Everything is presented as if it were a real documentary; there are no opening credits and the film is all shot on handheld video cameras. Anyone that actually watches the movie shouldn’t be fooled past ten or fifteen minutes in, but at least initially it does a good job of selling the documentary “found footage” idea of the picture. Not that that’s original or anything. This film exists purely to shamelessly rip off the success of The Blair Witch Project. That film dropped the year before and Full Moon and company were quick to spring on its success. From my limited research into the found footage genre, this seems to be the first rip-off released after Blair Witch too, so if that truly is the case, you have to give Full Moon credit for moving faster than anyone else.