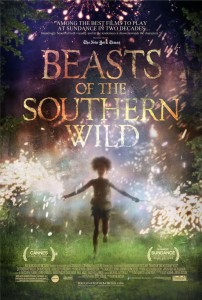 I feel like I’m becoming something of a broken record, as I keep going through the “big” 2012 releases and being less than impressed with a good portion of them. It’s these kinds of trends that rattle around in my brain when I’m considering going out to the theater, and that ultimately make me choose to stay home because I’m almost positive that I will be disappointed compared to people’s hype.

Anyway, Beasts of the Southern Wild! There’s a lot going on here, and most of it is under the surface or obscured through symbolism and metaphor. I’m not the brightest bulb in the bunch when it comes to uncovering hidden meanings, so I pondered the mysteries of what it all meant while I watched, and when it was over I was still left with many questions. I have to imagine that many of the disparate ideas and musings on problems both global and personal were to coalesce into meaning at some point, but it all must have gone right over my head.