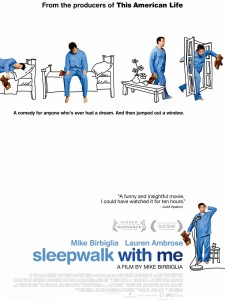 Sleepwalk With Me is the type of movie that would be easy to come down on either side of. If you’re not that interested in stand-up comedy, particularly the beginnings of a stand-up’s career, then a lot of Sleepwalk With Me won’t resonate as well as it could. The film is about more than this, but it’s steeped in the culture so those without an affinity for it might be bored. But this is exactly as it should be in this particular film, because its writer/director/star is Mike Birbiglia, a great comic who’s taken a very successful one-man show and fashioned it into a narrative film. I’d also say a healthy dose of love for Woody Allen is in order for those considering this film, as it has something of that feel, while still being its own thing too.

On top of the stand-up storyline, we also have Mike’s relationship with his long-time girlfriend Abby (Lauren Ambrose). They’re happy, but he’s not ready to take the relationship further, while she’s basically in a holding pattern waiting for him to get there. And, as the title suggests, Mike is a sleepwalker (and no, that doesn’t mean he turns into a cat) and it’s becoming more and more of an issue. Of course, he also doesn’t want to visit a doctor, which would acknowledge the problem and take that part of his life (the “you have medical problems because you’re getting older” part) to the next level. So to say that Mike has some issues to deal with is an understatement.