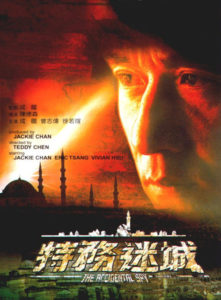 Jackie’s character background as an orphan once again puts him into a position of having a missing identity. He never knew his parents, and while he seems to have done well enough for himself, he wants to know where he came from. His dream of becoming a cop remains unrealized, perhaps due to his economic situation during his school years. They never address this, but I can assume. He clearly had the time and dedication to study kung fu, but for whatever reason he ended up selling exercise equipment and not policing the streets.

The Accidental Spy doesn’t do much in terms of actually revealing the character’s back story, but it does see Jackie fulfill his dream of becoming a force of good against the injustice of the world. Jackie’s character answers this call to action through personal risk and the help of some mentor characters, painting a somewhat extreme example of how one must engage in a degree of self-parenting in order to achieve your goals. The film’s handling of this theme is slight, if anything, but as someone who continues to appreciate the contribution of self-parenting and risk to one’s overall makeup, I liked that it was here at all. Jackie doesn’t just play a character who accidentally becomes a spy, he’s discovering and executing his calling in life.

The film’s action runs the gamut from OK, derivative material to fantastic, top-shelf Jackie choreography. Perhaps on a re-watch the “OK” scenes would play better, but in this go-round they felt over-edited (closer to an American style), leaving the choreography without much of a fighting chance. An early fight in a hospital room involves Jackie using a defibrillator and other medical items to thwart to bad guys, which is clearly a fun, great idea, but the editing often kills the flow to the point that I had a hard time enjoying the scene. This same thing could be said of the editing throughout a good portion of the movie overall, too, although The Accidental Spy won Hong Kong Film Awards for its editing and choreography, so what do I know? 🙂

Thankfully, the film features two standout action scenes that every Jackie fan should take a look at. The first starts in a Turkish bath where a bunch of dudes armed with knives attack Jackie while he’s naked and vulnerable. Sounds a bit like that famous (and excellent) scene from Eastern Promises, no? But while you may have seen that one first, The Accidental Spy was a full five years before Eastern Promises! Anyway, the scene merely opens here, before morphing into a thrilling chase through a street market (with Jackie naked the whole time, doing his best to cover up). It’s the kind of fun, comedic action scene that Jackie built his name on, delivering on multiple levels of entertainment simultaneously.

The film’s lengthy finale is even better, though. It’s more of an action/stunt sequence than fight-based, but they go big and they go hard and it is absolutely breathtaking. It is a constantly evolving car chase that seemingly escalates the tension with every moment. It also manages to do something unique: the scene actively engages and deals with the collateral damage wrought by a huge “only in the movies” action scene. I don’t want to spoil anything, but the sequences ends with one of the most impressive things I’ve ever seen in a movie, Jackie or otherwise. I’m sure that’s over selling it, but whatever, it’s so awesome!

If you’re like me and you missed The Accidental Spy the first time around, I’d definitely recommend it to Jackie fans. I watched the original Hong Kong cut, which is about 20-some minutes longer than the US version, so I can’t vouch for how that shorter version holds up. I do know (thanks Internet!) that they completely changed the plot and re-dubbed the movie even though about half of it is already in English. Gotta love those horrible US hack jobs on Hong Kong films… actually, no you don’t! It’s crazy that they’re still a thing!

Ardent Hong Kong film fans will want to keep their eyes peeled for a couple of small cameos from director Vincent Kok (Gorgeous), JC Stunt Team member Bradley James Allen, Scott Adkins, and longtime Hong Kong star Teresa Ha Ping (who you might recognize from a number of Shaw Brothers films including her role as Devil Grandma in Chor Yuen’s The Magic Blade.)

Next up in this chronological journey through the films of Jackie Chan is his first US sequel: Rush Hour 2! See ya then!