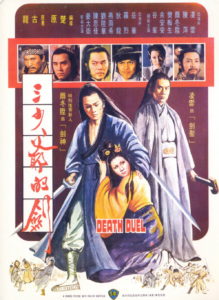 I’m not exactly sure what I expected going into Death Duel, but I felt off-kilter throughout most of the movie. I assumed it would be another in the lineup of great Chor Yuen adaptations from Gu Long novels, but I found it to be a somewhat poorly structured tale, and the character cameos from Chor’s previous films really threw me off. I’m not sure my experience is entirely the movie’s fault, though, as Death Duel is never boring or anything other than completely entertaining and fun; it all just felt sort of odd. I have a sneaking suspicion that like The Magic Blade, I’ll eventually re-watch the movie, love it, and wonder what I was thinking when I wrote this. In any case, Death Duel is both a great Chor Yuen film that delivers similar thrills to his previous mid-’70s wuxias, and a film in need of some focus.

Death Duel starts stunningly, though. Based on a relatively new story — serialized from June 1975 to March 1976, sharing the film’s Chinese title 三少爺的劍 (which translates to Sword of the Third Young Master) — the tale begins with Yen Shih-San (Ling Yun), as he arrives in a copse of trees at sunset. He’s called a meeting of elite swordsmen to test his martial skills, challenging the entire group at once and boasting that he will kill them all within 13 sword strikes. With this completed, only one man stands in Yen’s way to the top of the martial world: The 3rd Master, also known as the God of Swords. The 3rd Master is said to have an invincible sword technique, and Yen hopes to test his own invincible technique against it in a bid for the spot at the top of the ever-moving, tumultuous martial world. But when Yen tracks down the 3rd Master, he only finds his coffin. For all intents and purposes, Yen is now the greatest swordsman alive, but without challenging the reigning champion, what is this by-default glory worth?

I love this setup, but the film quickly shifts gears to its actual main character, Hopeless Ah Chi (Derek Yee, in his first starring role). It doesn’t take long to realize that all is not as it appears, and that Hopeless Ah Chin is not really so hopeless. It’s an act designed to transition Ah Chin away from his previous life as — you guessed it — the 3rd Master. This theme of wanting to leave the martial world behind has been done a gazillion times before, so the film’s success comes down to its structure and execution. This is where Death Duel is something of a letdown, because unfortunately after we have met Yen Shih-San in the dazzling intro, Hopeless Ah Chi is too bland and uninteresting to elicit much love. It’s also immediately clear that the two men will meet later in the film, so it robs most of the movie of its tension. The ever-present danger of the martial world is one of the defining aspects of Chor’s films for me, so to see it somewhat disregarded here was a real disappointment.

The action is on par with Chor’s other films, which is to say that it’s great but it’s also not the primary intent of the film. Chor’s movies are almost always story-driven dramas with action punctuating the scenes, instead of the more typical action-driven film with minimal story. Even when the action heats up between two master combatants, the fights are always over within a short amount of time. I always want Chor Yuen to indulge a bit more in the action, but this is my problem not his. He made the films as he wanted to, and this is exactly what made them stand out from their contemporaries. Within the context of Chor’s wuxias up to this point, though, I would probably rank this as one of the lower-tier films in terms of the effectiveness of the action and its choreography.

I’ve spent most of this review explaining the things that didn’t specifically resonate with me, but this is far from a true picture of how I feel. I genuinely enjoyed Death Duel, and it is yet another triumph for Chor Yuen. The intro is probably one of his best. The characters are mostly well-drawn, especially Yen Shih-San. If anything, I feel like my disappointment with certain aspects is a direct result of not entirely piecing together a few thematic elements. It’s a movie that seems like it has something to say, and the way it says it with these characters seems inspired. On this first viewing, though, I’m at something of a loss to put it all together.

I can usually come to some understanding while watching the movie, and if not then, while writing the review afterwards. Death Duel is one of those movies that defies my mental assaults, much like its lead characters’ invincible sword stances. Perhaps it’s that Chor Yuen made a sloppy film, but since he is an artist I trust, I will re-watch the film and try to reckon with the art he has made. I doubt I will come around on those goofy cameos, though. They really feel out of place, as cool as it is seeing Lo Lieh and Ti Lung show up for a scene as their characters from Killer Clans & The Magic Blade. Perhaps it was an attempt to show a cohesive “Chor Yuen martial world,” but it felt more like Rambo showed up for a scene in the middle of Commando.

I want to stress once again that I greatly enjoyed Death Duel. I had a lot of issues with it, but it’s a fine piece of wuxia entertainment. It also features some of the most gnarly, effective gore I’ve ever seen in a Shaw film. Major points for that in my book!

Next up in this chronological journey through the Shaw Brothers Martial Arts catalog is Hua Shan’s To Kill a Jaguar! See ya then!