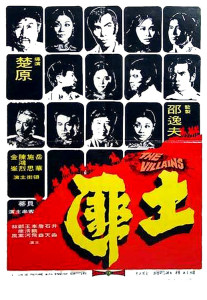 To say that The Villains is thick with melodrama would be putting it mildly. The film’s brisk 80 minutes are jam-packed with intense life events and familial struggles, so when they used the theme song from The Young & the Restless as score mid-way through the movie, I wondered if in some way The Villains was Chor Yuen’s satire of melodramatic storylines. I don’t think that’s the case here — would the 1973 HK audience even recognize the theme song? — but the soap opera comparison is definitely apt. But I don’t mind melodrama if it’s entertaining, and The Villains is definitely that.

Chen Hung-Lieh has a history of playing slimy villains in Hong Kong films, but his role in The Villains has to be one of his slimiest. His character is deplorable and without a single redeeming quality, and Chen plays the role to perfection. I hated the character, but I loved every minute that Chen Hung-Lieh was on-screen. The interplay between Chen, Yueh Hua and Cheng Miu feels real, too, as if they were a real family with a lifetime of resentment and built-up emotions between them. Shih Szu also does a great job in a strictly dramatic role, perfectly pulling off the innocence and repressed frustration that her character demanded.

As for the action: it’s sparse and not up to par with 1973’s upper-level films. Yes, even with Yuen Woo-Ping & Yuen Cheung-Yan in charge! The Yuen clan, and Yuen Woo-Ping especially, were still feeling out their talents at this point, but they do deliver action that is relentlessly exciting, even if it isn’t technically proficient. They achieve this by utilizing one of my favorites Shaw tricks: the “Break Every Wooden Thing in Sight” trick. So yeah, if there’s a chair, a table, a set of wooden shutters, a door, you name it, it’s getting smashed over a guy’s head or someone’s getting thrown through it! It entertains me to no end. Chor Yuen also had people running right in front of the camera during some of the fights, effectively adding another layer of chaos to the battles. I will say that amidst these scenes of wooden massacre and chaos, there are moments of choreography where the swinging of the arms and legs does approach and suggest the artfulness that would later define the genre.

The film’s title suggests a more crime-focused film, and the film’s opening credits even play over a bank robbery! This left me to wonder why it was titled The Villains. The film has a clearly defined villain in Fang Feng, but the title is The Villains. Then it dawned on me that every one of the main characters is living according to their own moral code, and consequently this puts them in direct conflict with one another. In a sense, depending on whose point of view we were to view the story through, any one of the main four could be considered a villain. The film isn’t nearly this ambiguous with its judgements, Fang Feng and Master Fang are the definite villains of the picture, but I just found it interesting to look at the story from these different points of view.

I’d also like to mention that the music over the opening credits is the theme from the film How the West Was Won, and a track from Ennio Morricone’s wonderful Once Upon a Time in the West score is well-used in a touching reunion scene. These music cues, along with the Young & the Restless theme, made me wonder about the current re-releasing of the Shaw catalog to iTunes and other digital retailers. In the case of this film, if they were to release it, would music licensing fees need to be paid? Would the music be replaced? I don’t have any answers, I just mention this as an example of the kinds of things I think about sometimes during the slower moments of movies like this.

The Villains is a good movie that throws a bit of everything into the mix. If you’re a Chor Yuen fan, definitely seek it out. Strict martial arts fans can give this one a pass, though, as the content here is too minor to really warrant a viewing unless you dig on melodrama. I will say that there is a lot more action than I expected there to be, though, and there’s a few scenes set at the wonderful and epic Shaw Brothers windmill set.

Next up in this chronological journey through the Shaw Brothers Martial Arts catalog is another Chang Cheh “troubled youth” picture: The Generation Gap! See ya then!