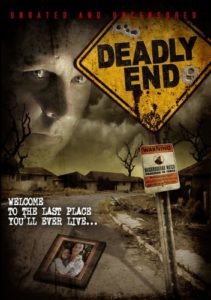 At this point in running Silver Emulsion, I’ve seen hundreds of low-budget films of varying quality. It’s rare to find one with a truly well-written script, and the same goes for things like quality acting, solid direction and effective special effects work. Deadly End delivers on all of these fronts superbly, to the point that I’m surprised the film doesn’t have a bigger fan base (or a fan base at all). Glancing at reviews shows mostly negative opinions, as well, something that really baffles me given the quality of the film’s cost-effective, low-budget filmmaking. Nick Searcy is superb as the neighbor Adrien, followed closely by Pell James’s performance as Wendy. Given the overall quality of the production, I am left with only one aspect of the film that might elicit such strong negative reactions: the “squirm factor.” 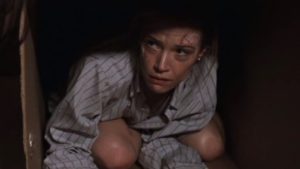 Deadly End is not a shy film. It dares to “go there,” and then it goes multiple steps further. The first inkling of this tendency comes inside the house of the Petersen’s neighbor, Adrien. The home is beyond dirty, looking more like a derelict house that hobo squatters frequent than a place someone lives in day-to-day. Adrien lies on his filthy bed with quarters over his eyes, while his index finger picks at a wet scab around a possibly infected wound on his abdomen. As if this wasn’t disgusting enough, Adrien then feeds himself small pieces of the scab, placing them on his lip and sucking them into his mouth. It’s something that you might see implied in a bigger movie, but Deadly End just goes right for it and shows the audience whether they want to see it or not. I found it to be a bold choice, and not at all gratuitous. It is done for effect and it works beautifully in this regard. Later scenes ramp up this gross-out factor, and in turn I squirmed and bit my knuckles and squealed a little in disgust and delight. I find modern horror to be either too safe or too graphic, but Deadly End strikes a perfect balance between black comedy and over-the-top gore to deliver something more akin to a modern ’80s movie.

If you love horror movies and you don’t have an issue watching low-budget films, then Deadly End is definitely one to add to your ever-growing list of movies to watch. It’s gross, unsettling and I doubt you will ever forget the experience. Strong stomachs only!

Next time I get around to a Full Moon movie I’ll be watching one of Full Moon’s new films that I missed: Ravenwolf Towers! See ya then!