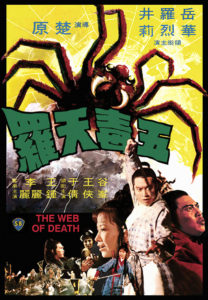 The Web of Death is not the first time this basic tale has been told. It was originally shot in 1967 as The Thundering Sword, directed by Hsu Tseng-Hung. The sword of the title has been replaced by the Venom Clan’s spider, and lots of other little things are different, too, but the films follow the same basic structure. This story is actually adapted in part from Jin Yong’s famous wuxia novel Heaven Sword and Dragon Saber, basis for many film and TV shows, perhaps most notably as a pair of 1978 Chor Yuen films and Wong Jing’s 1993 film starring Jet Li: Kung Fu Cult Master. Instead of following the novel’s story, though, both The Web of Death and The Thundering Sword merely take Jin Yong’s established world, its clans and certain characters in order to craft a rollicking wuxia version of Romeo and Juliet. Fei Ying Xiang is essentially Zhang Cuishan, Hong Susu is essentially Yin Susu, and in the novel these characters marry and beget the story’s main character Zhang Wuji (played by Jet Li in Kung Fu Cult Master). So in a way The Thundering Sword and The Web of Death are prequels of sorts to the main story, but because they were written to be independent works, they don’t actually match up outside of a few parallels.

The film is certainly packed with action and fantasy thrills, but like Killer Clans and The Magic Blade, physical displays of fighting prowess are just not a concern of Chor Yuen’s. The focus is more on the broad aspects of the world than the nitty gritty of fighting like it would be in a Chang Cheh film, so the feel is completely different. There’s some great action moments, but The Web of Death is even less about presenting fights than Chor Yuen’s previous films. The action in Killer Clans and The Magic Blade was edited in such a way to allow its characters more fantasy-tinged moments of wuxia wonder, and that is the focus of just about every moment of action in The Web of Death. This is where the film feels most influential towards later films that lean heavily in this direction, such as Tsui Hark’s Zu: Warriors from the Magic Mountain, or the aforementioned Kung Fu Cult Master. Tang Chia and Yuen Cheung-Yan do great work within this context, but like the film it is more experimental and daring than the more traditional fight work seen in either of their previous choreography filmographies.

I really enjoyed The Web of Death, and I feel that I will only enjoy it more with time. It is somewhat disappointing that it doesn’t reach the heights of The Magic Blade or Killer Clans, but it’s entertaining and fulfilling in its own way. A firm love of the era, wuxia films and campy filmmaking may be required to truly appreciate this one, though. It is almost entirely studio-bound and it’s filled with special effects, so while it is a nice step forward for the genre, uninitiated viewers are likely to spot the seams instead of the fun.

Next up in this chronological journey through the Shaw Brothers Martial Arts catalog is Cheng Kang’s King Gambler! I’m not sure how much martial arts action there is in it, but I love HK Gambling movies so I’m stoked to see it! See ya then!