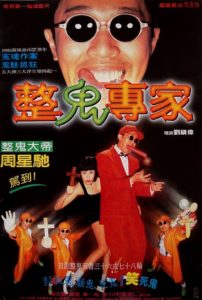 This is kind of a broad description of the overall story, but it doesn’t do justice to the way that everything unfolds and develops. Like many Hong Kong films of the ’80s and ’90s, Out of the Dark can’t be categorized or boiled down into a sentence or two. It is many things at once, and the skill with which all the elements are brought together here is nothing short of amazing. It is edited to absolute perfection, with sharp comedic timing and not a single extraneous moment to slow it down. To craft a film as quick and energetic as this requires supreme skill, and director Jeff Lau is most definitely up to the task. Lau previously directed Chow in his star-making God of Gamblers parody All for the Winner, as well as the two Chinese Odyssey films (which were both released a few months prior to Out of the Dark in 1995). 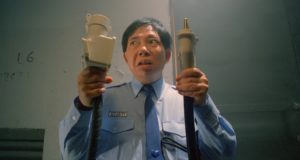 My love of Stephen Chow has really blossomed over the last couple of years, but going into Out of the Dark with an expectation of Chow’s usual comic mania will lead to disappointment. The movie is bursting with more energy than a nuclear reactor, but the humor is pretty dark and unlike anything else I’ve seen from Stephen Chow. For instance, one scene shows a man stabbed repeatedly, and contrary to how that might sound, it’s absolutely hilarious! But to get back to our star, you barely even see his face during the film! For the most part he’s hiding behind sunglasses and a hat, and there’s a long stretch that has him wearing exaggerated, fake teeth. Oddly enough, this actually helps to disconnect the film from any kind of traditional Stephen Chow expectations.

Out of the Dark is a unique film that won me over completely after I adjusted to its style and pace. It’s darkly hilarious, but unafraid to dive deep into the horrific, creepy vibe of the best horror films, making it an excellent choice for Halloween!