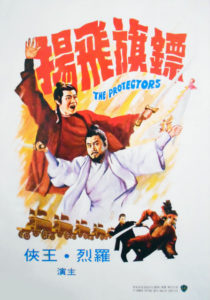 The solid duo of Lau Kar-Wing and Chan Chuen choreographed the action to be quite robust and entertaining. Given the film’s length, the fights are surprisingly plentiful, which definitely keeps the pace rocketing forward. The level of entertainment is very high, with lots of great, unique touches of supernatural wuxia abilities mixed into the choreography. The standard sword work is no slouch, though, as it also delivers lots of fun and exciting thrills. The credit sequence is probably the most memorable sequence, in part because it’s fantastic, but more so because it’s one of those classic Shaw Brothers openings where the actors perform in front of a giant colored backdrop, in this case a black one and later a white one. Previously I was under the impression that Heroes Two was the first film to do this, so either The Protectors was groundbreaking or they shot the intro while getting the film ready for its long-awaited 1975 release. That’s my guess, anyway.

What limits The Protectors, though, is simply its lack of anything that really defines it from the many ’60s and early ’70s Shaw wuxias. Like I said, the story is solid and the characters are well-defined with fun weapons and/or costumes, but that could be said of most of the early Shaw wuxias. It’s a wonderful piece of entertainment, but it lacks the depth or excellence necessary to rise above the sea of good Shaw wuxias. Hell, I just watched it and I’m finding it hard to come up with things to talk about… and I really liked it!

I suppose what I’m trying to say is that The Protectors is a perfect diversionary movie. It will entertain and distract, but it will not make you think. If you dig on early ’70s Shaw wuxia, though, it’s definitely worth a watch, especially if you like a good security bureau movie or enjoy seeing Lo Lieh in a heroic role. I feel bad that the review is kinda short, but so is the movie! 😛

Next up in this chronological journey through the Shaw Brothers Martial Arts catalog is a list! The Protectors was the last film of 1975, so next time around I’ll present a list of the Top 10 films from 1974–1975, before embarking on 1976 the following week with John Law Ma’s Bruceploitation film, Bruce Lee and I! See ya then!