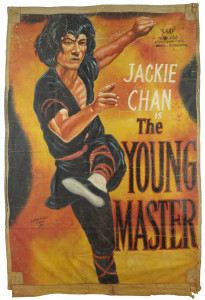 Expectations: Pumped. This movie is great.

Every thing that happens in The Young Master all comes back to one simple act of deception. We all make choices in our lives every day, sometimes even unconsciously. While driving, a quick flick of the wrist could cause a massive pileup. At the least, this would ruin a few people’s day, at the worst it might take their lives and your own. The choices we make define us as people, and a choice made purely out of greed for money is usually never a good one (unless you’re in an ’80s movie like Cocktail, but that’s beside the point).

In the case of The Young Master, this deceptive choice causes lots of strife for those around this character doing the choosing, but as a movie it allows for scene after scene of great, comedic martial arts action. It all starts on a fairly serious note, though. The Young Master opens with one of the best lion dance sequences ever put to film, and the following 30 minutes or so are devoted entirely to furthering the characters and the dramatic elements of the plot. This foundation is necessary to cement the moral point of the film. Once this is in place, Jackie is let loose and The Young Master hits its stride, sailing effortlessly to its conclusion. 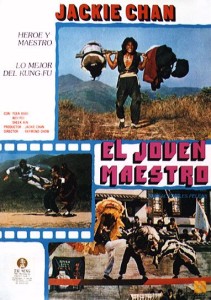 But before I move on, I’d like to examine one of my favorite shots in the film. It comes early, during the lion dance, and it perfectly showcases the filmmaking ingenuity of both Jackie Chan and the Hong Kong film industry at large. It is a single shot that captures multiple images, a technique utilized heavily by the Shaw Brothers studio throughout the ’60s, ’70s and ’80s. It was initially designed as a way to speed up the editing process — this type of shooting requires less cutting — and it later became a stylistic trademark of this era of Hong Kong film.

So in this shot, the camera starts on the man under the tail of Jackie’s lion as he makes a dangerous jump between barrels. The camera quickly moves to catch Jackie’s reaction to this, then moves down for a line of encouraging dialogue from Jackie’s teammate. The camera continues to the side, capturing a shot through the stacked barrels of the drums played by another of his teammates. The camera then pans back up to Jackie’s face under the lion’s head. It’s a remarkable, perfectly constructed shot that goes by so seamlessly you might even miss it, or be unaware that it was all done in a single shot. Jackie Chan definitely does not get the credit he deserves for being such an impressively visual director.

The way the film’s main villain is introduced to us is also particularly effective from a directing standpoint. The fearsome man’s shaggy hair hangs down over his face and his movements are quick, precise and brutal. The first kick he makes after being released from his shackles is delivered to us in slow-motion that amplifies its thunderous impact immensely. Through the choreography and the careful shot placement, this villain is sold as an ultra-powerful force of nature within seconds. Even his first appearance on-screen, chained face-up on the platform of a wheeled cart, gives the audience an idea of this man’s incredible power. Jackie brings this all together with Gustav Holst’s Mars, The Bringer of War (from his famed orchestral suite The Planets), adding another layer of badass, ominous presence to the villainous character.

So when the time comes to eventually square off against this formidable villain, the fight is an epic struggle for survival. At this point in the film, we’ve seen Jackie fight with a number of combatants, but none of them hold anything close to the power that this evil master wields. We’re also aware that Jackie’s character isn’t a master himself, he’s still only a student that has much to learn. But he is headstrong and courageous, so his lack of experience does not hold him back from giving the fight his all. The battle plays out similar to the end of a Rocky film, making the audience question if Jackie will be able to overcome his opponent and triumph. It’s a fantastic fight and Master Kam (Whang In-Shik) is one of martial art cinema’s great villains.

While watching, I was also struck by the odd thought that a Jackie Chan fight compared to older martial arts films is similar to how fighting video games have advanced over the years. When fighting games and martial arts films began, the focus was more on the technical aspects. Can we convincingly make it look like these two actors or sprites are fighting? In both mediums, the backgrounds were merely window dressing to further the illusion. By the time Jackie Chan and fighting games were coming into their own, the fighting itself was no longer an issue. It all looked great. But while Jackie’s athleticism made his fights stand out as something fresh and new to film, it was his inventive usage of background items that set him apart and continues to define him. In the same way, when fighting games began utilizing interactive backgrounds it was a revelation. The idea of an interactive background, both on film and in games, is now taken for granted, but the importance of this shift and Chan’s broad imagination in fight choreography should not be undersold.

Only Jackie’s second feature as a director, The Young Master is a fantastic piece of work. It is more accomplished than his directorial debut, The Fearless Hyena, and the unique martial arts comedy that would come to define him is on full display throughout. The film also attempts to remedy the “problem” with Drunken Master (that it’s light on story), and while it delivers a great moral, this ultimately does make The Young Master a somewhat less successful film in my eyes. I guess I just love to see Jackie performing tortuous training routines (of which The Young Master has none). This is largely a question of personal preference, but even if I rank this one just behind Drunken Master in terms of Jackie’s early work, second-best behind one of the most influential martial arts films of all-time is definitely not a bad place to be!

And while you’re all pumped up about The Young Master, you should totally check out Uncle Jasper’s review of the film from the early days of Silver Emulsion!

Next up in this chronological journey through the films of Jackie Chan is the film that Lo Wei refused to release when it was originally shot, but had no problem releasing after Jackie had become a sensation: Chen Chi-Hwa’s Half a Loaf of Kung Fu! See ya then!