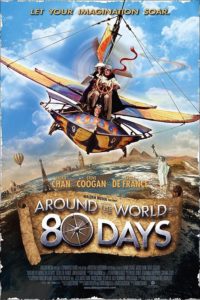 I feel like the journey itself was downplayed a bit in this version (compared to my memories of the 1956 film); it often felt like they were wasting a lot of time without caring much at all about their tight timeline. I’d like to think that this is due to the differing perspectives on traveling during the years when each version was made. The original novel was first published in 1873, so the idea of traveling around the world in 80 days must have seemed like pure and total fantasy. In 1956, we had progressed considerably since then, but I feel like air travel and globalization were still relatively far-off concepts that allowed the story to still be somewhat fantastical. By the time of this 2004 version, travel is a much less precious thing, so I feel like the steampunk and fantasy elements were added to bring back some of that wonder to the story. But to get back to my original thought, I think this progression is what makes this new version seem more focused on the stops than the journey. I could also be remembering the original film incorrectly, too. 🙂

Like the original, our heroes globetrot through many exotic locales populated with fun cameos, and I gotta say, the cameos were very enjoyable. I’d enjoy an Arnold cameo no matter what it was, but his ridiculous, permed hairstyle made it infinitely better than if it were just normal Arnold. Then they roll around to China and Sammo Hung pops up, playing Wong Fei-Hung no less! He doesn’t do much more than just show up and fight a little, but I didn’t care much because with Sammo, Arnold and Jackie in one movie… it’s like I cast this thing! They also include a version of the Ten Tigers of Canton dressed up like ninjas with snarling tiger-mouth bandanas, which seems a bit odd, but it led to a big fight in a classic kung fu setting so it’s a choice I can appreciate.

This scene also has current Hong Kong star Daniel Wu playing a character named Bak Mei. Outside the film, this character is better known in the West as Pai Mei, the white-eyebrowed Shaolin monk from many classic kung fu films (as well as Kill Bill Vol. 2). Karen Mok, star of Wong Kar-Wai’s Fallen Angels, is also given a nice villain role, and the actress who plays Jackie’s mother, Violet Pan Ying-Zi, was a Shaw actress in her youth and appeared in The One-Armed Swordsman and many other influential Hong Kong films. There are also the big-name American cameos as well, so the film is a rich experience for fans of American and Hong Kong cinema alike.

The film’s fights were choreographed by Jackie and his stunt team and they’ve come up with some great stuff. They are less complex than what is seen in Shanghai Knights, but without the re-edits and the distracting music I found the work here to be more enjoyable. The fight in the art gallery is a standout, with Jackie and the villains splashing paint everywhere and even collaborating on a painting of their own! The fight in the warehouse is fun, too, but what I’ll remember the most is the big battle in China. Seeing Jackie in a classic kung fu setting is pretty rare outside of his early years, and if I’m not mistaken this is his first time since Drunken Master II to venture into the era. In any case, his fight with Daniel Wu is excellent, and he gets to wield a bench, one of my all-time favorite kung fu “weapons.” So even if it is kind of derivative, it was a treat and I was a happy camper.

But through all of this, the element of Around the World in 80 Days that surprised me the most was the amount of heart woven into its script. They built a wonderful thematic arc for Phileas Fogg to learn what friendship can mean to a person. The beauty of expanding one’s horizons, the need for art and legends and storytelling, facts and science… it’s all brought together quite naturally to deliver a clear and well-told moral. Perhaps because the film was aimed at a young audience they worked more on delivering a moral, or maybe it was always a big component of the story. If it was, I definitely never learned that from watching the original, which I did many times in my youth. I always got the feeling that Passepartout was never much more than a servant to Fogg in that one, but again, maybe I need to re-watch.

Around the World in 80 Days does feel a bit long at two hours, but it’s also solid entertainment most of that time. I wouldn’t call it a great film, but it is a film that is true to itself and it works well because of this. In the same way, if you don’t slip into the movie’s groove, it could easily swing the other way into pure nausea and boredom, so be aware of that possibility. In any case, I enjoyed it a lot more than I expected it to, and it certainly wasn’t worthy of a pair of Razzie nominations and a big ol’ belly flop at the box office.

Special mention must also be made of the film’s immense offerings of sideburn styles. If you like sideburns, this is your movie! 😀

Next up in this chronological journey through the films of Jackie Chan is the Hong Kong film New Police Story! Very excited to finally see it! See ya then!