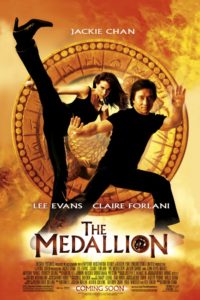 Before watching The Medallion, I was under the impression that it was a Hong Kong film. It actually turns out to be much more of a US/Hong Kong co-production (with more power on the Hong Kong side). This creates an odd tone and feel for the film; it never feels like a film from either country, instead it feels like a watered-down, mixed-up version of both countries’ styles. The closest thing it reminded me of is Jackie’s mid-to-late ’90s Hong Kong films that were produced primarily in English, but in their re-dubbed and re-edited American versions.

In simple terms, this is roughly what The Medallion is, with the key difference being the inclusion of known American actors to create more of a second-tier American film than a Hong Kong crossover. The other major difference is that in the case of The Medallion, there is no version other than this US release. Apparently Sony didn’t care for Gordon Chan’s original cut, so they re-shot some stuff and completely re-edited the film, even changing the plot a little. And since the film’s rights were bought in totality by Sony, this prohibited a Gordon Chan cut from being released in Hong Kong. So this is all we have of The Medallion, although I imagine the extensive deleted scenes on the DVD represent a fair amount of what might have been in the film under different circumstances. And I must say, having watched those deleted scenes, that I don’t think these scenes would’ve combined into anything superior than the released version.

The action was choreographed by Sammo Hung, and when it’s good, it’s very good. There’s an excellent chase through the streets and some great martial arts exchanges throughout. The final fight is between Jackie and Julian Sands, so I wouldn’t say that there are any real standout fight sequences, but the film is pretty action-packed and always moving. The one moment that sticks in my mind as memorable is of the very common “Jackie deftly scales a fence or gate” variety. The instance of this in The Medallion is astounding for its scale, but it’s also presented in such a way that big fans have a moment to know that it’s coming and have a laugh at the expense of the villain. It’s a clever moment of choreography, and I wish the film had more of this instead of the relentless, unfunny Lee Evans antics.

Like The Tuxedo, though, there are quite a bit of wires being used to help Jackie and/or add supernatural abilities to the characters. As a fan of Hong Kong films mixing in the supernatural, these moments added a lot of fun — specifically the super strength. Unfortunately, The Medallion was made during the CG-era, so these wires have been digitally removed. I love the wirework of Hong Kong that makes average men capable of above-average feats, but removing the wires makes it look cheap, betraying the genuine skill and craftsmanship involved in the wirework. Your mileage will definitely vary on this depending on your tolerance of modern film and CG, but it’s something that always bugs me and there’s quite a bit of it in this one. Maybe one day I’ll get over it, but today is not that day! 🙂

The Medallion is far from being a competent movie experience, but for fans of B-Movies and cinema that pushes the normal creative boundaries, you might end up enjoying it regardless (as long as you can overlook a lot).

Next up in this chronological journey through the films of Jackie Chan is a documentary about Jackie and his father, Traces of the Dragon! See ya then!