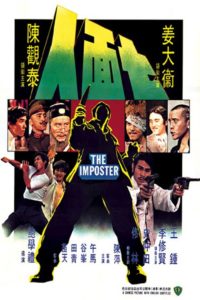 The Imposter is a movie that’s fairly hard to classify. It definitely has enough action to qualify as a martial arts film, but it feels more like a movie that has martial arts instead of a true martial arts film. If that makes any sense. Anyway, the star of the film is David Chiang and his many disguises, so if you’re not into David Chiang, you could skip this one and not miss too much. But for those still on-board, the cast is stacked with top-shelf Shaw talent and David Chiang fans should enjoy the ample opportunities he is given to jump in and out of characters throughout the movie.

Tseng Yung (Danny Lee) has been wrongly imprisoned by the police chief Captain Lo Gin Yin (Chen Kuan-Tai). Tseng’s brother, Tseng Kan (Wong Chung), bribes a guard to let him talk with Yung, who tells Kan to find an illusive man named Ge Liang (David Chiang), as he is the only one capable of proving his innocence and saving his life. In basic terms, this is the whole movie in a nutshell, since finding Ge Liang is a prolonged multi-step process, and then proving Tseng Yung’s innocence is similarly complex. The one constant is David Chiang and his ever-changing disguises, influencing the other characters to do whatever he needs them to. Ge Liang is not just a master of disguise, he is a master manipulator as well.

On paper, this movie has the potential to be a beast of a good time. The cast is the kind generally only assembled for a Chang Cheh film, but this is misleading as The Imposter doesn’t come close to living up to whatever expectations the cast list might inspire in fans. It does give us a Chen Kuan-Tai vs. David Chiang fight, though, and if I remember right this might be the first time they’ve squared off against one another on-screen in this capacity. Chen Kuan-Tai’s role in particular is atypical for him, so it’s fun to see him playing against type. That’s true of the overall film, too; it’s a fairly unorthodox Shaw film, but it still manages to be fun while it forges its own path.

The action — choreographed by Huang Pei-Chih and Chan Chuen — is great at its height, and fun but kind of inconsequential at its worst. The “OK” stuff comes towards the beginning, so soldier on and don’t be discouraged. Although, the middle section is largely without action, so I’m not entirely sure if the finale is really worth it if you’re not into the rest of the movie. The finale is considerably better than previous fights in the film, but the emotional impact isn’t really there so it’s a far cry from what could have been with a stronger director. Hopefully Chang Cheh took a crack at pitting Chen Kuan-Taui and David Chiang against each other so I can have my ultimate fantasies fulfilled (provided they weren’t already by a movie I’ve forgotten 🙂 ).

As I mentioned, The Imposter is a weird, unclassifiable Shaw film. It’s largely about Ge Liang manipulating people, but I wouldn’t call it a drama. Its tone is closer to something between drama and comedy, but the comedy isn’t very pronounced (at least it didn’t feel that way to me). The idea of everyone believing Ge Liang’s disguises is definitely a stretch, but y’know that’s just one of those things you have to go with to enjoy a movie like this. And enjoy it I did!

Next up in this chronological journey through the Shaw Brothers Martial Arts catalog is Chang Cheh’s Journey to the West film The Fantastic Magic Baby! See ya then!