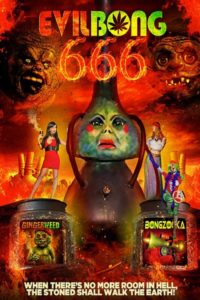 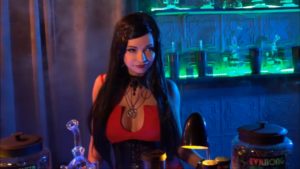 The shift in characters allows for hellish elements to infiltrate the series, which worked really well for me. Sexy Hell may just be essentially a re-skinned version of Bong World, and it may be obvious that’s it just one giant green-screen room, but it has an undeniable charm. It also brings back the mysterious actor known only as The Don from Gingerdead Man vs. Evil Bong. He plays Beelzebud, the ruler of Sexy Hell, and he’s a hoot. He’s not the kind of hoot to show Grandma’s Bridge Club on Saturday night, but to the right crowd he adds a considerable buzz that lasts well after the film is over. By far the best new character, though, is the Gingerweed Man. He’s completely different than I had expected, and he’s hilarious. That’s all I’ll say about him!

Evil Bong 666 also stands apart in how it deals with Full Moon’s now-standard, in-movie advertising. There’s still a lot, but it’s naturally laced into the fabric of the film so it never takes you out of the movie; this is Charles Band in-movie advertising 2.0, and I greatly appreciated the change of pace. I instantly recognized the Smoke Cartel stuff from their involvement in previous films, but I honestly didn’t even realize the Vapor Cup was an actual product until well into the movie. But it is, and I imagine they will sell a lot of them to the legion of stoners that might stumble upon this movie on Amazon or Hulu or wherever else Full Moon is able to infiltrate these days. Of course, the film is also available on Full Moon Streaming, but I imagine anyone watching it there is already a big fan and not stumbling into anything. 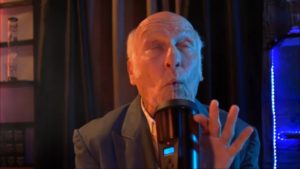 But probably the best and most encouraging thing about Evil Bong 666 is that the series finally took my advice. Evil Bong 666 is the first Full Moon movie in a very long time that doesn’t feature Hambo or try to hawk his line of racist dolls. This is such a welcome and positive change, and I hope it signals his absence from future films, too. I hate that I’m even mentioning the dolls and in turn giving them more press, but I really want to commend Full Moon on doing their best to make a pleasing entry that is actually more movie than ad. Against the odds, I’m actually looking forward to next year’s entry that is teased at the end of the film (don’t act surprised!).

Set your expectations to OG Kush, stock up on Girl Scout Cookies and slip into the Blue Dream that is Evil Bong 666.