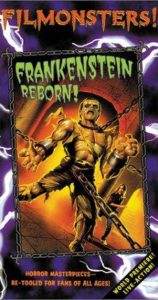 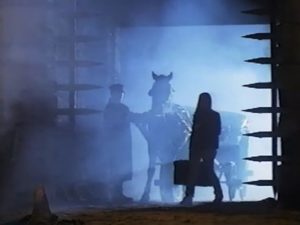 No matter how inconsequential and lightweight the movie may be, in the moment it’s fairly entertaining. I wouldn’t say that it’s an adaptation of Frankenstein in a strict sense, since the main character is neither Dr. Frankenstein or his monster. No, because this is technically a Moonbeam-leaning film aimed at kids/teens, our main character is Anna (Haven Paschall), the recently orphaned niece of Dr. Frankenstein who has come to live in his castle. To say that the doctor is a controlling man is an understatement; he basically tells Anna that she has to stay in her room all day, every day, or something to that extent. You can’t expect me to remember trivial details like this!

The film moves along as you might expect, and it does incorporate elements of the traditional Frankenstein tale, but by far the most entertaining moment of the film came when a bit of director David DeCoteau seeped through the Gothic atmosphere. If you’ve seen a lot of his movies (or read my reviews of them), you know of his love for including scenes with people in their underwear. It’s honestly something I didn’t expect to pop up in this one, since it’s aimed at kids and I couldn’t think how you could work a locker room or a similar “underwear friendly” zone into the film. But then it happened: the monster escapes from the lab and runs through the forest with his bandages strategically wrapped into something of a boxer brief! It’s possible that I’m seeing what I want to see here — paging Dr. Rorschach — but damn if I didn’t howl out in laughter regardless of the intent. It was worth watching just for that; the fact that I enjoyed everything else is just gravy.

I’m unsure that Frankenstein Reborn! is really worth recommending, but if you dig Frankenstein and low-budget movies, I’m sure there are worse ways to spend 45 minutes. If you want to go all-in, it’s also available edited together with its Filmonster brethren in Frankenstein & the Werewolf Reborn!.

Next time I get around to a Full Moon movie I’ll be checking in with Danny Draven’s Hell Asylum! See ya then!