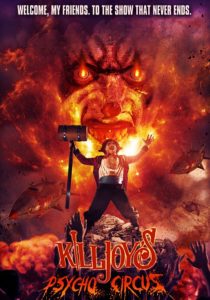 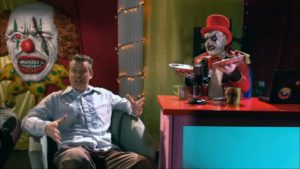 Now to be fair to Killjoy’s Psycho Circus, the space stuff is pretty fun. It’s too derivative to be great (referencing Star Trek, Spaceballs, Superman, 2001, J.J. Abrams lens flare, etc.), but I’ll accept it to see another horror franchise make the jump to space. The TV show stuff (which is a majority of the movie) is far less effective and closer in tone and style to Charles Band’s films than the previous Killjoy movies. So hopefully you like in-movie ads (from Full Moon and others like Adam & Eve) and filler that is neither entertaining or engaging.

One bit of filler was pretty interesting, though. On the talk show, Killjoy interviews the actor that plays him, Trent Haaga. As a scene, the interview isn’t much more than a dumb joke, but it does allow the audience a side-by-side comparison of “normal” Trent Haaga and “Killjoy” Trent Haaga. His performance as Killjoy fills the character with a distinct personality that transcends the performance. Who played Killjoy? Uh, Killjoy played himself, duh! It’s an impressive transformation, and the scene allows a great look into the depth of creativity involved with assuming a character’s identity. It’s more than simply donning the costume and the mask, you must breathe life into him, too! 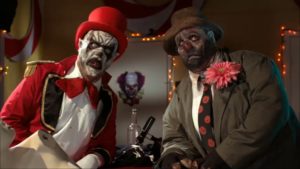 The FX work is largely CG-based and looks good for the most part. Like all of Lechago’s films, it’s impressive how he’s able to pull off an FX-driven film with such a low budget. Killjoy’s Psycho Circus was funded in part through the studio’s double Indiegogo campaign with Evil Bong: High-5! which promised, among other things, more practical FX. This didn’t seem to translate to much notable difference in Evil Bong, and I have to say the same about Killjoy.

Neither film is truly in the horror genre, so the opportunity for great make-up FX is somewhat limited, but Killjoy’s Psycho Circus has some distinct instances that would have been insanely better with practical FX. There are a pair of head explosions and both are achieved digitally. They still look OK, but there’s nothing like a live, practical head explosion. I’m sure most of the FX budget went towards making the CG better and more plentiful, and the film does benefit from this, but I can’t help but want a couple of good ol’ fashioned head explosions. I guess I’m just a traditional kind of guy.

As much as I didn’t particularly care for Killjoy’s Psycho Circus, it is still far more inventive and imaginative than most modern Full Moon films. It’ll probably please the rabid Killjoy fans who have waited patiently during the four years between sequels, but I don’t see much of anyone beyond that caring much for this one. The film sets up future Killjoy films (including a possible Killjoy/Evil Bong crossover), but I’m more interested in whatever Lechago makes outside the Full Moon brand.

Next time I get around to a Full Moon movie I’ll be posting the review I bumped for the new Killjoy: The Horrible Dr. Bones! See ya then!