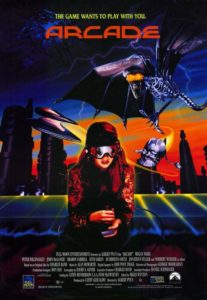 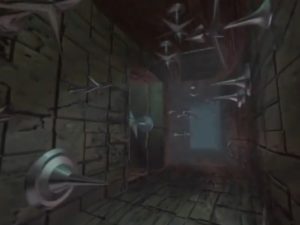 For roughly the first hour of the movie, all you see of Arcade is the first level. So even though these kids are actively trying to uncover things and figure everything out (through lots of boring conversations), all you see of the game is the kids floating down hallways adorned with giant spikes. The “game” seems to be hardly anything recognizable as a game, and within 30–40 seconds of play beginning, the manifestation of the game’s arch-villain, also named Arcade, chases them down and kills them immediately upon impact. The first time all of this occurs, it’s pretty fun and interesting, but after the fourth or fifth time, not so much!

The flip side of this disappointment is that the final act is ridiculously entertaining, comprised of the characters blasting through the remaining six levels in rapid succession. Seems like an odd choice structurally, doesn’t it? But that’s the way it is, so if you are able to persevere through the murk you are rewarded pretty well. The levels themselves are interesting, too, as only one of them seems to follow any kind of standard video game trope (in this case, a simple racing game). In a film that’s otherwise boring and repetitive, this kind of innovation is welcome, but far too late to pull the movie from the quicksand.

Probably the biggest transgression of Arcade (the movie) is that the characters have absolutely no depth or characteristics to endear them to the audience. It’s not that they exhibit negative or annoying traits, they literally have none. They are just actors saying lines with no emotion or character behind them. It’s supremely uninteresting and boring. So all you’re left with is the early ’90s CG game footage, and most of the movie is just those same spiked brick hallways. Hahahaha, it’s almost impressive how devoid of emotion this movie is. It also looks like it was shot on a series of sets where malfunctioning fog machines bathed everything in a vague haze, and coupled with the nearly constant ethereal soundtrack (by frequent John Carpenter collaborator Alan Howarth!), it’s just about impossible to stay awake during Arcade. 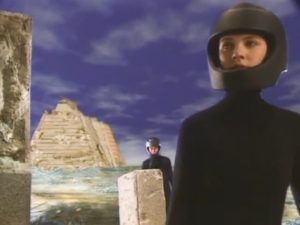 The computer FX that make up the video game world are well done, though, especially considering that CG was still a novelty at the time this was released. I’m sure Arcade was something of a Full Moon reaction to the popularity of The Lawnmower Man, but it really does set itself apart with its FX work. Fans of Robert Rodriguez’s Spy Kids franchise might feel a bit of deja vu, as the premise and the green-screen visuals of Spy Kids 3D: Game Over certainly owes a debt of gratitude to Pyun’s Arcade. Also of note is that the CG FX work was re-done prior to the film’s release and you can see some of the differences at this blog post I found about it.

No matter how much I liked the weird game world and the film’s finale, there’s no way around the fact that Arcade is a rather bland film beyond these points. You certainly don’t see any flash of talent from screenwriter David S. Goyer that would suggest his later success on films like Batman Begins, that’s for sure! I didn’t particularly care for this one, but maybe you should watch it anyway because it seems to be well-liked in the Full Moon fanbase.

Next time I get around to a Full Moon movie I’ll be watching the 2000 Ted Nicolaou film The Horrible Dr. Bones! I hope it’s not horrible. See ya then!