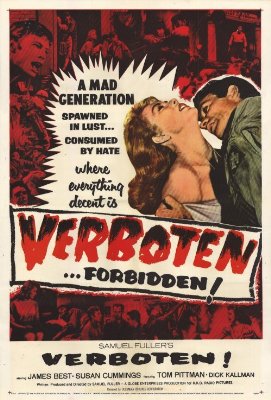 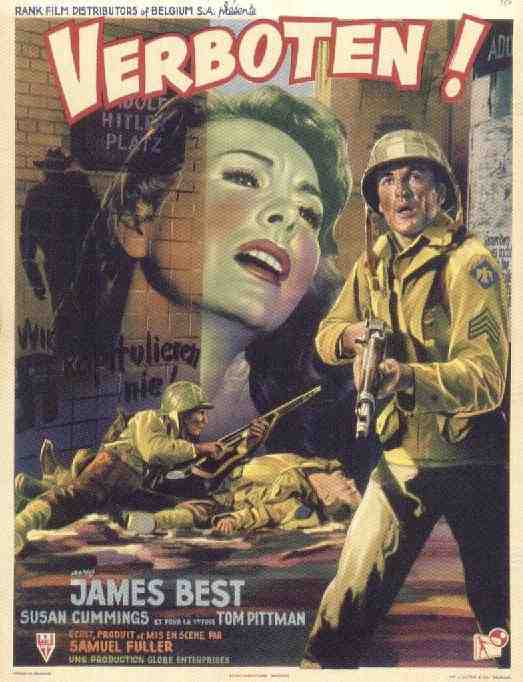 James Best plays an American G.I. wounded in battle and nursed back to health by Susan Cummings’ sympathetic German. At first Best is nervous that he has been taken hostage by the enemy, but Cummings is quick to dismiss his fears with the notion that all Germans are not Nazis. Hitler first persecuted Germany before trying to take over the world, she says. The town where they’re located is soon controlled by the Allied forces and shortly thereafter the war is won. Best has a chance to return home, but instead weds Cummings and takes a job at the American Military Office in the Food Department.

Verboten! is not a plot-driven film in the normal sense though. Underlying the initial setup is Fuller’s desire to relate the climate in post-war Germany. He had been there and had first-hand knowledge of the events, so what better person to take it to the silver screen. In addition to this, Fuller also wanted to convey the horror of the Nazi war crimes, which he had also experienced himself when he helped to liberate the Falkenau death camp. The footage he shot there and his experiences are explored fully in the documentary Falkenau, the Impossible.

Due to this three-pronged desired objective for the film (create quality narrative, convey post-war climate, relate Nazi war crimes) the film suffers just a bit and comes off as slightly disjointed. For instance, during the first third of the movie we follow James Best through the story I described above. After he gets the government job, the focus shifts to an ex-Nazi soldier and Cummings’ brother, who work and live with Best respectively. This section charts the rise of the Nazi underground faction, the Werewolf (complete with Wagner’s Ride of the Valkyries on the soundtrack). Once this is established, the film again shifts focus to dealing with the Nazi war crimes. It is only through the skilled pen and hand of Sam Fuller that this kind of movie works, but I can see it putting off people who come in expecting a straight narrative movie. To call Verboten! disjointed and leave it at that isn’t being fair though. The script is very well written and the focus shifts always make sense and happen rather seamlessly. There is an overall narrative that continues through the film, but the main character should be seen as post-war Germany instead of James Best. 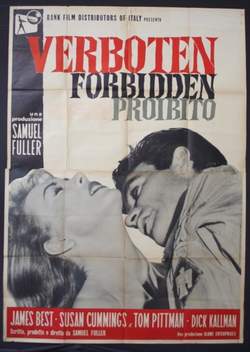 Fuller mentions in the documentary Falkenau, the Impossible that he used some of the footage he shot after the camp’s liberation to enhance the dramatic effect of key scenes in Verboten! I didn’t specifically notice any of the same footage here, but there is a strong commitment to using documentary footage that really adds a lot to the film. Early on it is used to show Nazi artillery strikes, and in one piece of film a man fails around on a roof with his leg blown off. The power of the documentary footage is incredible, and the fact that it doesn’t necessarily blend well with the professional footage makes it that much better. It is like a call to the mind, letting you know without a shadow of a doubt that what you’re witnessing is truth on celluloid. The truth is surrounded and informed by the fiction, and it lends the film an unflinching quality that is unlike any other film on the subject.

This is nothing compared to the power of one of the final scenes depicting the Nuremberg war crime trials. I was caught completely unaware by this scene and its striking force. Fuller takes a seemingly minor supporting character that we’ve followed sporadically and places him in a situation where he has no choice but to confront the truth of his actions and the actions of his compatriots. As he watches the documentary evidence of the Nazi’s heinous war crimes, he realizes that he’s been wrong all along. The weight of his deeds change his face and the face of the audience follows suit, because in that moment we are one with him in his shock and disgust at the truth we are being shown. Most films based on facts are purposefully a step removed from reality, as many viewers prefer the romanticized truth that they can easily deal with and move on. Fuller’s choice to use striking, visually disturbing documentary footage in this key moment takes away that security blanket of fiction and forces us all to reflect and confront the demons of the situation. It becomes a living newsreel at this point and like the character, we too can only widen our eyes in horror at the images we will be hard-pressed to quiet in our minds and whisper, “I didn’t know. I didn’t know.”

This is some hard-hitting shit for the late 50s and absolutely quintessential Samuel Fuller filmmaking.

Verboten! was recently released to DVD through the Warner Archive manufacture-on-demand service. I can vouch for the quality of both the disc and the remastering job, and I wholeheartedly recommend that you check out the large selection of forgotten films and television series over there! They didn’t pay me for this either, I swear!