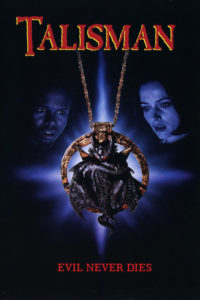 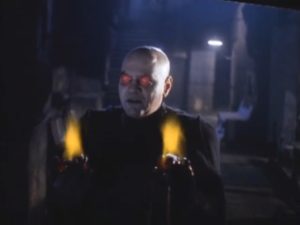 When Elias was a child, his parents pulled a talisman out of his grandfather’s grave and then resurrected said grandfather with the talisman, a couple locks of hair, a few spices, some magic words, and the blood of a three-month-old virgin. So in other words: a perfectly normal family outing! But before you get excited for Elias to get his grandfather back, know that Gramps isn’t the kind of guy to sit on the porch sucking on a Werther’s Original, he’s the “harbinger of the end of the world and literally rip your heart out” kind of guy. Oh, and after he rips out your heart, he sets it on fire in his hand. What a guy! I loved him, in part because all he does is walk ominously across the screen or rip hearts out and set them ablaze. He’s a man who knows what he wants! I also got a kick out of how much he resembles the unmasked Darth Vader at the end of Return of the Jedi.

Talisman is so effective because its script perfectly paces the reveal of information about the characters and their past. Thanks to this, we are intrigued to listen to the dialogue and take in the story. This level of story engagement is kind of rare in low-budget films, and especially in later period Full Moon stuff (to me, anything from the late ’90s on is “late period”). A couple of the big reveals are too obvious well before they’re meant to be, but it’s not anything that hinders the film from being enjoyable. We may know where the story is heading, but the journey there goes places that only B-Movies can, so there’s always something to keep your interest. I’m having a hard time explaining why I liked this movie so much; I keep wanting to say it’s fun and leave it at that. But to that point, it is fun and because it’s barely 70 minutes, it moves fast and incredibly well. 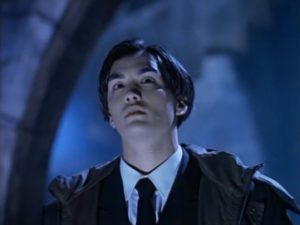 I must also admit to liking this one a lot because of the talisman itself. It’s a weird-looking thing, but it’s really well designed and constructed. I have no idea what it’s actually made of, but it looks evil and heavy as fuck. To make sure you know it’s evil, it’s a pentagram with an upside down cross on top of it, and as a dark cherry on top: a snarling gargoyle whose face is hidden by his wing. Sometimes. Yes, because this evil talisman is so evil, the gargoyle sometimes peeks above his wing when he’s preparing to do some unspeakable evil. He’s gotta make sure the coast is clear! Little things such as this are what made me love Talisman, but these are also the types of things that might fly past other viewers (like a little gargoyle perhaps? 🙂 ).

Sometimes I have concrete reasons and explanations for feeling the way I do about a film, and then there are times like this when I’m at a loss for words to properly convey my love. It’s like there’s not much about Talisman that stands out as great, but added all together it’s a perfect piece of low-budget filmmaking. If you like this sort of thing, definitely give it a shot!

Next time I get around to a Full Moon movie I’ll be watching a non-Full Moon David DeCoteau movie that Charles Band executive produced: The Brotherhood! See ya then!