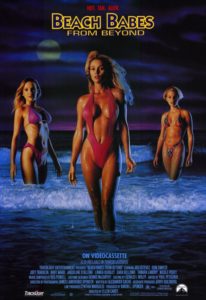 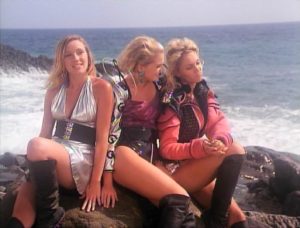 I’m kind of at a loss for how to go about this review. A movie like this is one that you’ll either dig or not, and since it focuses on titillation before all else, there’s not a lot for me to comment on. I didn’t count minutes or anything, but most of the movie seemed like it was girls dancing on the beach. The big finale happens during a bikini contest — with a prize of $30,000!!! — and that consists of more dancing/parading and a band playing a song called “I Got a Woody” non-stop for what seemed like 10 minutes. So if you’re wondering why there’s no star rating up top, this is why.

Even though Beach Babes from Beyond is mostly dancing, I still enjoyed it a lot. It’s the definition of a “turn off your brain” movie, where everything is absurd and not meant to be taken seriously. It’s not as funny as I had hoped it would be, but there’s plenty of skin along the way to make you forget there isn’t much of a movie. Whether that works will hinge on your particular proclivities, but if you’ve taken the time to hunt this one down I’ll assume you know what you’re getting yourself into (or you’re a huge DeCoteau fan). It’s hard not to become self-aware and somewhat shameful about watching such a prurient movie (or maybe that’s just my problem), but it’s only 75 minutes so you won’t need to self-flagellate too much. 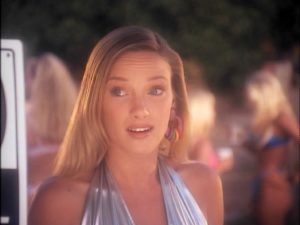 There aren’t many softcore sex scenes, though, and what’s here is fairly restrained, meaning that in the R-Rated version available on DVD they have been edited to be relatively short. This is what distinguishes the Torchlight films (at least the two I’ve seen) from Full Moon’s later company Surrender Cinema, which are about 90% softcore with a thin sci-fi/fantasy premise wrapped around it. In any case, the scenes successfully hit the mark as erotic counterpoint to the absurd comedy, and in their edited form your mom won’t have to shield your eyes for too long. The film’s VideoZone feature shows footage from the unrated version, though, and they are considerably more steamy.

But beyond everything else that the film has to offer, what really kept my eyes glued to the screen was the lead Sarah Bellomo. She had a short career in porn under the name Roxanne Blaze, and she just so happened to be in one of the first tapes I ever got my grubby hands on (Yes, in my day we had to somehow acquire VHS tapes, kiddos!). I was very enamored with her then, and apparently I still am. Her beauty is undeniable, and honestly her acting chops aren’t bad either. Transitioning into traditional films after an adult career is always a hard sell, and very few ever do it successfully. I think she did a great job, though, and I’d really love to see her show up in one of Full Moon’s new films, perhaps if they decide to make a Trophy Heads 2! 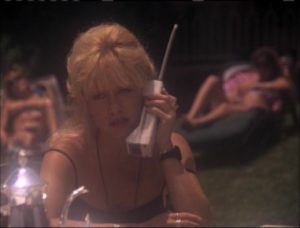 Overall, I can’t call Beach Babes from Beyond a good movie, but it is one that is made with a spirit of fun and playfulness that you don’t see so much in modern movies. As such, it’s an entertaining movie if you’re willing to take it as it is and not expect anything else from it.

To close it out, here’s a couple of lines that I found especially funny:

“Yeah! You gotta see the donut, not just the hole.”

Next time I get around to a Full Moon movie I’ll be shifting 180 degrees into the 1999 Moonbeam film The Boy with the X-Ray Eyes! See ya then!