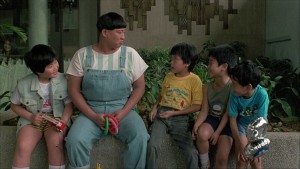 Jackie Chan’s characters are not known for their believability, and to be honest his character here isn’t as developed as it could have been. Even still, I found myself relating a lot to his character. As a caregiver myself, I have felt all the same feelings that Jackie expresses when he blows up and yells at his feeble-minded brother. Jackie does a wonderful job at exploding all that pent-up rage and resentment that can build up when you dedicate your life to another. What makes the scene really pull at your heartstrings, though, is the acting from Sammo Hung. Sammo is perfectly innocent and childlike, playing off his generally youthful, boyish looks to great effect. His charming face is a smiling slate for Jackie to hurl insults at, and it’s just brutal.

Sammo the director does make a few choices that belittle our attachment to the characters, though. Directly after this heartfelt scene of Jackie blowing up and subsequently realizing how much he loves his brother, Jackie plays soccer with him by kicking the ball too far and letting him fetch it while Jackie tries to mack on his girlfriend. I guess it isn’t so bad — Jackie’s entitled to get a few seconds of quiet time — but then he kicks it deep into the jungle in order to get more time. It’s funny, no doubt, but coming after the previous scene it feels like nothing has truly changed for Jackie’s character. He had a realization that led nowhere. I suppose this is more true to life than I’m giving it credit for, though, as change is always slow, gradual, and rarely hinging on a single moment of epiphany.

Actionwise, the film mostly keeps the traditional Jackie Chan excitement to the beginning and the end. In keeping with the more serious, dramatic tone, the action is also more graphic than general Jackie action. He’s literally machine gunning dudes at point-blank range in the intro! Later on, the finale begins as a tense gun battle, but one filled with the kinds of stunts and general craziness associated with all Sammo Hung or Jackie Chan-directed action scenes. Even here the tonal mixing shows itself, as the heavy, life-or-death mentality that guns bring is at the opposite end of the spectrum compared to the “Oh shit!” fun of watching talented performers in stunt-filled fights.

The one-on-one fight between Jackie and Dick Wei, broken up with sections of Jackie beating the living shit out of James Tin Jun, is fantastic and really should be examined again by action fans who may have written this film off long ago like I had. But surprisingly, what really impressed me about the action and stunts of Heart of Dragon was how much the lesser-known stuntmen were featured. Names like Mang Hoi may not mean anything to the average filmgoer, but he receives ample time to shine and hold his own in Heart of Dragon. And he is just one of many supporting members of the cast that impress with great stunts or bits of martial arts. Sammo also doesn’t participate in the fights because of his character, but he still takes a number of great stunt falls that really sell the beatings given to his character.

Overall, I liked Heart of Dragon this time around. It’s not a great movie, but it is effective for what it sets out to do, and just around the time that the drama starts to bore, the story shifts gears into a more classic action movie model that delivers a thrilling finale. Come for the brotherly bonds, stay for the kicks to the face.

And for anyone interested (and who wouldn’t be!), the two fight scenes cut out of the middle of the film can be found here or here (for the fight in the parking lot), and here for the Methadone Clinic fight.

Next up in this chronological journey through the films of Jackie Chan is the one and only muddafuggin’ Police Story! See ya then!