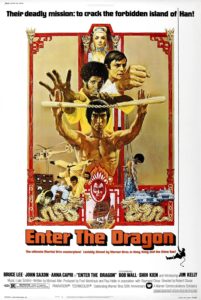 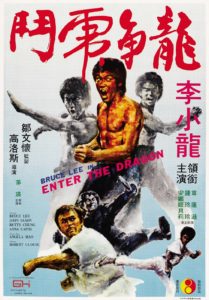 The pacing, the editing, and the direction (specifically within the fights) all feels quite American, as well. It’s not that this is a bad thing necessarily, but in terms of directly comparing my enjoyment of this to a great Shaw film like The Blood Brothers, the Shaw film wins without question for me. That being said, 1973 wasn’t all that strong of a year for the Shaw Brothers, and Enter the Dragon is definitely better overall than most of the Shaw offerings.

No matter how much the first half of Enter the Dragon drags or has a weird feel, once everyone gets to the island the movie is an absolute blast. The pace picks up considerable speed, ditching the story they tried to inject into the first half and just focusing on delivering badass moments as soon after one another as possible. If you consider yourself a martial arts fan and you don’t get enjoyment from the film’s second half, I feel sorry for you.

From a choreography standpoint, though — especially to people watching the film now, after so many years of martial arts films — I can understand being somewhat disappointed. Clouse’s camera rarely captures the angles you want to see of Bruce Lee, choosing instead a much closer shot than a Hong Kong film would traditionally go with. Regardless of this, Bruce Lee’s expressive face, his sheer martial prowess, and his relentlessly engaging screen presence easily overpowers these issues. The fight through the underground factory, with Bruce progressing through a variety of weapons as he defeats the guards, is a standout in Lee’s filmography. I wouldn’t be surprised to learn that it influenced Jackie Chan’s style somewhat, as it has the feeling of one of his battles (minus his athleticism and intricate choreography, of course.)

The film caps itself off with its most iconic scene: the fight between Bruce and Mr. Han (Sek Kin) that ends within Han’s mirrored hidden room. Now Lee’s charisma is joined by legacy-building imagery to create an end fight that impresses on every level. Bruce’s fights are always remarkable; he was a true master with a style all his own. Despite repeated attempts, this iconic style has never truly been duplicated. The final battle of Enter the Dragon is not his most technical, but it’s arguably the most satisfying fight of his limited screen career.

Enter the Dragon is a classic that only gets better as it goes along, culminating in one of the coolest and most well-known fights ever put to film. If you haven’t seen it, check it out!

Next up in this chronological journey through the Shaw Brothers Martial Arts catalog: The Pirate from directors Chang Cheh, Wu Ma & Pao Hsueh Li! See ya then!