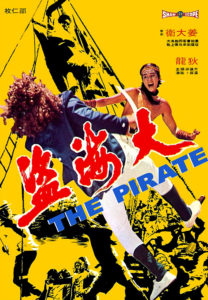 This dramatic focus is true of the film through its first hour, with nice flashes of action sprinkled throughout. The war of words and deception crafts thick tension, with the action serving to deepen the divide between the characters and enhance the audience’s anticipation of their fateful clash. Like The Duel, as soon as you catch wind of the character that David Chiang plays, you know he will cross fists with Ti Lung. It’s the question of when and how that keeps you in your seat waiting for that inevitable moment.

The Pirate is notably bloodless for a Chang Cheh film. This is probably a good indicator that either Wu Ma or Pao Hsueh Li actually directed the film, but I can’t find any actual info to corroborate this and Chang doesn’t mention The Pirate in his memoir. The confidence and quality of the overall film leads me towards Chang actually steering the ship, though, so who knows? Maybe on this one they all contributed equally, as they are credited together as “Jointly Director” instead of on two separate title cards like on The Water Margin.

With the drama thoroughly explored and thriving, The Pirate then releases all that pent-up tension in a ridiculously thrilling beachfront battle. In 1973, no one was choreographing better action than Tang Chia and Lau Kar-Leung, and the work within this fight exemplifies their place at the top. The battle rages on the sand and in the water, with many leg locks and throws mixed in with the standard kung fu. It gives the film a martial identity all its own amongst its contemporaries, something Chang Cheh films have a definite knack for. His longtime collaboration with Lau Kar-Leung and Tang Chia is perhaps the most influential team-up in the history of the martial arts film (not to mention everything else they each did on their own!). This battle also exhibits a true mastery of action filmmaking; the choreography, the editing, the camera work, Chang’s trademark slow-motion, and the Shaw-standard snap zooms all come together brilliantly to create and maintain a flow throughout the entire sequence.

In any other movie this scene would be the knock-down, drag-out finale, and it truly contains the caliber of action and character dynamics to support that. But in The Pirate it is merely a bombastic, badass prelude to the inescapable fight between Ti Lung and David Chiang. After such an epic, multi-layered fight, this one-on-one struggle can’t quite muster the same effect. It’s a fantastic fight — I can’t stress that enough — but a conflict arose within my mind that hindered my full enjoyment. It’s similar to the same way I feel whenever they fight each other — I love them both and I don’t want to pick sides, I want them both to win — but here the characters are also equally ambiguous. In the end, this kind of hesitance to choose sides works to the film’s greater effect, but, at least in terms of fun, the previous fight wins.

I get the feeling that The Pirate isn’t that well-loved of a Shaw picture, but it’s every bit the first-rate film that the talent involved would suggest. This leaves me to think that it’s more of a question of access than dislike, but you’ve got no excuse now, as the film received its first home video appearance in the West just a few weeks back via iTunes and other digital platforms. So if you’ve never seen The Pirate, allow me to submit the film as one of the under-the-radar Shaw films you should make an effort to watch (or re-watch/re-evaluate, as the case may be).

Next up in this chronological journey through the Shaw Brothers Martial Arts catalog: Na Cha and the Seven Devils from directors Yamanouchi Tetsuya & Doi Michiyoshi! See ya then!