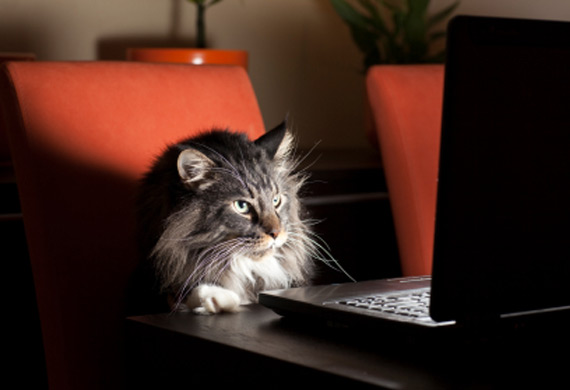 Another year has flown by and here I am once again, wondering what to say and staring at a picture of a cat using a computer. In last year’s update, I talked about stepping back from Silver Emulsion a bit to focus more on my caregiving duties for my wonderful wife who unfortunately has multiple sclerosis. This year was a further progression of this, but I still managed to keep the reviews flowing pretty regularly. I did take a week off here and there, so I guess I can officially say that I’m not wicked. 🙂

I can also officially say that at this point, my Arnold review series is all but done. For once, one of my “next year” predictions in a status update was correct! Do I win something? [Editor’s note: No.] I only have a few cameo roles to do Quick Take reviews for, and those won’t drop for a while as one of them is the film version of Raymond Chandler’s The Long Goodbye. I refuse to watch that one until I read the book, and I can’t read the book until I finish re-reading the other Chandler novels. I’ve got a couple more to go. In any case, outside of this final cameo post and whatever new movies Arnold is in, I can move my attention to finishing the other three series that I committed myself to (quite some time ago now!).

In doing this, I’m really going to try to get a Shaw Brothers review up every week. Not only will this make me happy, the Shaw series seems to be the most popular thing going here at Silver Emulsion. The Shaw posts consistently get good traffic… not so much when I post them, but over time they really seem to do well. Not that I’m all about numbers, but it is a nice feeling to know that people are interested in what you’re doing. And funnily enough, the Shaw reviews are also the ones that I enjoy writing the most!

I can’t think of anything else to mention, so let me continue my tradition of predicting where I’ll be next April 12th.

So here’s to another year of reviews! Hope you enjoy following along with me on my little film journeys.

8 thoughts on “6 Years of Emulsification!”