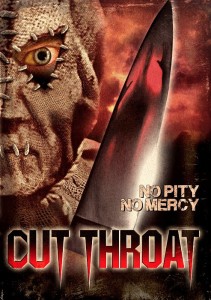 Where Cut Throat really stumbles is by presenting us with an entire movie of annoying, unlikeable characters. This, obviously, is nothing new to the horror genre, and many films succeed in spite of this. But Cut Throat offers nothing as a life preserver to latch onto; all you have is these grating characters yelling at each other in between boring, relatively bloodless murder sequences. Gore is not a necessary component if your film is up to snuff, but Cut Throat definitely needed something kind of attention getter like inventive gore or something similar. It’s the age-old tradition of low-budget slashers, for God’s sake! 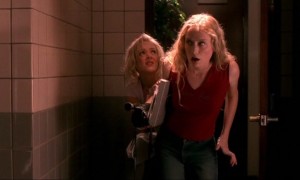 What did get my attention was that this low-budget horror film from 2002 was shot on 35mm film! WHHAAA??? Not only that, but director Keith Walley really tries to infuse the film with style and quality camerawork. It’s a noble effort, too, and there’s a tracking shot around the film set that’s pretty impressive in its intricacy and its ability to weave in and out of various conversations. But like Speck, these flashes of style don’t really serve the story, so they just kind of make you go, “Cool shot,” and then you go back to being bored and indifferent about the whole thing. I love the ambition of it all, though, and Walley’s films do stand out from the other low-budget films of the time. I just wonder if choosing to shoot Cut Throat on video instead, and then spending the extra money on FX work would’ve been a more prudent production decision.

I didn’t much like Cut Throat, but I definitely respect the ambition of trying to make the film more than the standard shot-on-video, early 2000s, low-budget Scream clone. I’m sure Walley had to convince the money men to let him shoot it on film, and the fact that he was successful shows that his passion and dedication to film was probably a pretty powerful force. If only his films were able to properly harness this passion and channel it into something worth watching.