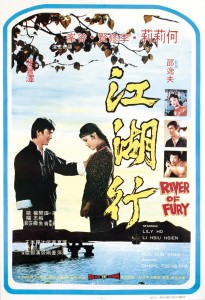 The characters are what drives River of Fury, and both Duobo and Ge Yi-Qing are unique, compelling and overwhelmingly charismatic. The performances from Ku Feng and Lily Ho are great, but to be honest I don’t know that I’ve seen a bad performance from either of them. The weak link is definitely Ye Zhuang-Zi. In his first starring role, Danny Lee doesn’t make a great case for himself, but I think that the real fault is in the writing of his character. He’s easily the least interesting character of the film, and he mostly just kind of coasts through the movie following the lead of the other characters.

By the end of the film, though, I saw that his character wasn’t bad writing so much as it was careful, purposeful writing. His character is rudderless at the start of the film, so it makes sense for him to exist as he does during the meat of the story. When the film ends, he’s actually no better off than he was at the start. He is once again at a crossroads with his whole life ahead of him. He is essentially restarting the “circle of life,” except this time, he will move forward with the knowledge that experience brings. River of Fury definitely isn’t on par with Ni Kuang’s best scripts (by any means), but it does end up delivering a potent life lesson that remains relevant even today. When I started writing this review I was ready to give Ni Kuang a pass for a bad character — the guy wrote 18 movies in 1973, so it would be completely forgivable — but I’ve come around to see the film a bit differently by thinking and writing on it. Another of the benefits of having a site like this to explore my feelings on a film! Don’t know how it plays from a reader’s perspective, but I definitely enjoy it.

Shaw fans will want to note that River of Fury is not a martial arts tale (as you can probably tell from the synopsis), but it does features a pair of fights choreographed by genre greats Yuen Woo-Ping and Yuen Cheung-Yan. The first fight is fairly inconsequential and average (outside of the shots showing the action from very far away, something fairly rare and novel in a Shaw film), but the second fight that caps off the film is fantastic. It’s a one-on-one fight, and like a lot of Shaw films from the Yuen Brothers, there’s a lot of wooden things getting smashed. There’s only two combatants, so it’s not as much as other films, but here it’s far more brutal. Danny Lee is violently thrown through a pair of doors, his face is smashed repeatedly into a table, a chair is mercilessly beaten over his back until it completely shatters. I’ve just had the thought that the use of the surroundings in these Yuen fights is somewhat heralding Jackie Chan’s style. It’s definitely not inventive and funny like Jackie, but it does feel stylistically like a predecessor of his style.

This wonderful fight works not just because of the choreography and the brutality, it works because director Chang Tseng-Chai has skillfully built the film and the characters to this point, allowing the tension of the entire film to explode in a flurry of kicks and punches. His camera seemingly never stops moving, too; there’s always a snap-zoom or a camera move, or a snap-zoom into a camera move, etc. This constant motion is evident throughout the film, but like the film itself it really heightens in the final act and allows the movie to move at a breakneck pace. Arguments could be made that this kind of filmmaking isn’t great, but when it makes for a visually exciting piece of work that wouldn’t be as good without it, I have to side with Chang Tseng-Chai and his interpretation of the general Shaw shooting style.

River of Fury isn’t a great film, but it’s good and it endeared itself to me quite a bit. If you’re into the Shaw Brothers and you’re looking to branch out from the more traditional martial arts tales, this isn’t a bad one (though, I definitely wouldn’t start here).

And before I go I have to give a shout out to Ou-Yang Sha-Fei, who is wonderful as Ge Yi-Qing’s mother, imbuing the character with a vitality and a pathos that only a veteran actor could.

Next up in this chronological journey through the Shaw Brothers Martial Arts catalog is an exploitation film from Ho Meng-Hua: The Kiss of Death! See ya then!