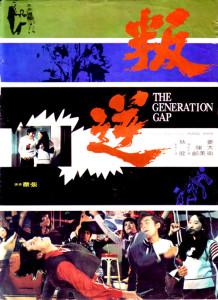 The film opens with a block of text explaining that it does not take sides in the struggle represented in the film. Chang Cheh is clear with his audience that it is up to them to draw conclusions from the drama presented to them, and while there are moments when it does feel like the film is on one side, this impartial nature ultimately holds true. I suppose I could argue that the 3rd act does take sides, but given the characters’ actions up to that point, the ending doesn’t seem like it was contrived to make a specific statement.

Cindy’s dad (Yeung Chi-Hing) is utterly ruthless. Her dream is to be a singer, but he forbids her from singing and even does his best Pete Townshend and smashes her guitar in front of her to drive home his point. From what we see in the film, it’s easy to assume that Cindy’s life has been nothing but strict discipline. The good ol’ “Rule by Fear” method of parenting. It has worked to a point, Cindy is a good-natured, well-mannered kid, but she seeks escape. No doubt this is what attracts her to Ling Xi, a carefree soul who wants nothing more than to see Cindy realize her dream. He literally has no ambition besides this.

Ling Xi’s father (Lo Dik) isn’t the complete opposite by any means, but he represents a different parenting style: one of a much more loose disciplinary style. I got the idea that Ling Xi’s father suggested a lot of things to his son, but rarely, if ever, forced anything on him. So when his father finally decides to get tough when his son is 21, it doesn’t have much of an effect. Ling Xi wasn’t prepared for adulthood by his father, so he goes about his life aimlessly, living only in the given moment. Both fathers are approaching the situation a bit wrongheaded, but their intentions are good. I mean, if a 21-year-old dude came to whisk away my 16-year-old theoretical daughter by promising her that her dreams were coming true, I’d have a few things to say about it, too!

My first instinct was to be on the side of the young people, but I did grow to understand the motives of the parents over time. Perhaps more damning to the kids’ case were their own actions, which proved that while they felt very much in love, they were building on a very shaky foundation. Cindy is clearly still a child, and incapable of looking at the situation logically. When they move in together, Ling Xi buys her a guitar to replace the one her father smashed (which was nice of him), but he also buys her a large doll. What a horrible waste of money in their situation! He then shows her the karate gi he bought himself (because martial arts is the most important thing to him after Cindy and cars), but because he has no self-restraint he smashes their only table with his fist while showing off to her. They are kids playing house… and the house is made of cards!

By the end of the film, though, it’s hard to be critical of any of the characters. Ling Xi makes some horrible choices, and he pushes away anyone that tries to set him on the right path, most notably his older brother (Ti Lung). So if anything, Ling Xi is the character that should shoulder most of the blame, but it’s much more tragic and complex than that. Ultimately, it feels like taking sides is exactly the wrong way to go about this kind of situation, and if everyone could have worked out a satisfying compromise the story wouldn’t have had to end the way it did. Being open-minded towards compromise is generally good advice for life, so to find that this is the lesson I took away from the film’s events is hopeful. Chang Cheh’s previous youth-oriented films play with these ideas, but none are as thematically potent and well-executed as The Generation Gap.

Agnes Chan made her film debut in Chang Cheh’s Young People, and while she’s not a trained actress she does a great job playing the naive youngster Cindy. The Generation Gap features a number of songs from her album Original I (A New Beginning), including a song that was either written for the film or the script was written to match up exactly to its lyrics: You Are 21, I Am 16. The songs are a welcome change in tone from the heavy drama, with most of the singing happening in a wonderfully ’70s dive bar.

Along with the drama and the songs, The Generation Gap also has a healthy amount of fights, too. Choreographed by Tang Chia and Lau Kar-Leung, the fights are well-constructed and exciting. David Chiang obviously isn’t a top caliber martial artist, so the battles are definitely missing that extra edge to make them memorable on an athletic level, but the fights themselves are all very well-staged. The fighting is at its best when the script calls for Ti Lung take a shot at knocking some sense into his younger brother, and the entire final fight staged on a floating platform in one of Hong Kong’s ocean bays is superb entertainment.

The Ti Lung/David Chiang fight has a lot of old-school flailing and obvious non-connecting hits, but there are also moments where the pair trade a series of hand blows that feel incredibly prescient. In 1973, the martial arts genre was on the precipice of a barrage of incredible displays of kung fu, and it’s small moments like this that show was what to come. The final fight shares this trait, but it is more memorable for the locale and how its escalating nature feels more akin to the kind of fight that Jackie Chan would perfect in the following decade.

The 3rd act also shows Ling Xi becoming progressively more brutal, smashing Dean Shek’s head into a barrel and stomping another guy through the wood of the floating platform’s floor. The Generation Gap isn’t really bloody at all (like you might expect from Chang Cheh), but the ending is just as emotionally bleak and hard-hitting as his endings usually are. This one in particular has to rank as one of his best, though, at least in terms of how it couples camerawork and emotional impact. I’m not going to spoil it, but in the final shots of the film Chang Cheh manages to create lasting images that simultaneously illicit emotion and symbolically make a point about the way Ling Xi led his life. It’s fantastic stuff, and it makes me wish that Criterion would put out an Eclipse box set of Chang’s troubled youth films so they might get more well-known. That’ll never happen, but the films are definitely worthy of some study nonetheless.

The Generation Gap is also the first movie to feature future Shaw Brother star Alexander Fu Sheng in a named role. Previously he had been an extra in a few Shaw films (five to be exact), but in this one he has a few lines as Cindy’s cousin. He must have caught the eye of Chang Cheh around this time, as his next role was a major supporting part in Chang’s next film, Police Force. Fu Sheng followed this by starring in six 1974 Shaw films (and many, many others before dying tragically in 1983).

The Generation Gap is could easily be a lot shorter — for instance, sometimes the songs drag on and are repeated — but it’s ultimately a good movie that has a lot to say.

Next up in this chronological journey through the Shaw Brothers Martial Arts catalog is Chang Tseng-Chai’s River of Fury, featuring the first starring role for Danny Lee! See ya then!