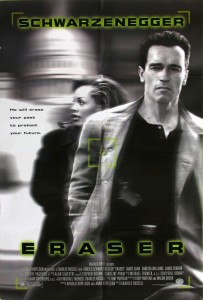 Re-watching the film as an adult, I can easily see why my grandpa got such a laugh out of the whole thing. It’s SO over the top and ridiculous, and within the “realistic” framework of your standard ’90s action film it seems even more extreme than it normally would. In a more modern film I usually balk at this type of thing because the proliferation of CG FX work has made action films seem more like video game animation than cinema to me. But in an older film, specifically an ’80s movie, over the top was a good thing because realism was never something the ’80s action film cared about. And this is also the key to understanding why I love Eraser: it looks like a ’90s action film, but it is made in the fun-loving spirit of the ’80s.

Exhibit A: the opening credits play out against shots of our badass hero getting suited up to be badass. That’s like totally ’80s! There are a few instances of these shots in the film as well, although they’re quick and more subtle than the ’80s ever would have been. The most obvious one is the close-up of Arnold sliding his hidden knife into his belt buckle. Wouldn’t it make sense that the knife was just hidden there all the time? Sure, but in the spirit of the ’80s we relish the chance to watch an action hero don the instruments of his trade.

Exhibit B: the final action scene on the docks. Not only does Arnold survive an insurmountable amount of explosions and rail-gun carnage, he then dual-wields a pair of rail-guns and proceeds to explode everything in sight. This is probably the closest to the pure macho essence of Commando that Arnold has been since Commando. Vanessa Williams is also similar enough to Rae Dawn Chong to draw even more comparisons between the two films.

Exhibit C: Director Chuck Russell. Russell hasn’t made a lot of films, but his output in the ’80s consists of two bona fide classics: A Nightmare on Elm Street 3: The Dream Warriors and The Blob (one of the finest remakes that ever remaked). Both of these films understand implicitly what makes a great ’80s film and go directly for it, and Russell brings this knowledge forward into Eraser.

Perhaps my “exhibits” aren’t strong enough to sway you over to my side (assuming you didn’t already start there), but if you still don’t believe me, I can offer one final, definitive piece of evidence. The film’s final line is an Arnold one-liner, after which we immediately cut to the rolling credits and a kick-ass hard rock song. If that doesn’t scream ’80s, I don’t know what does.

What does all this boil down to? I had a blast re-watching Eraser. It brings the ’80s and the ’90s action movie sensibilities together really well, and it provided Arnold with one of his most badass roles in years. Plus it has FX work by both Steve Johnson and KNB! I almost shit my pants when I saw that in the credits! Do yourself a favor and bring yourself to the same point of almost shitting yourself by watching the late Arnold classic Eraser!

Next up in this chronological journey through the films of Arnold Schwarzenegger is The 6th Day! Cloned Arnold! See ya then!