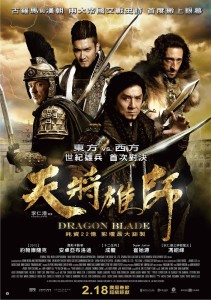 Going into Dragon Blade, the biggest question for me was how Adrien Brody and John Cusack would blend together with everything else. Turns out they do pretty well, but they are also part of the film’s weird energy. Adrien Brody paints his villain character with broad, loud strokes. I’m sure he had a blast on-set, and it’s definitely entertaining, but his talent is wasted as a one-note villain that would’ve been better played by a character actor. The same basically applies to John Cusack’s character, except he’s as subdued as Brody is loud. In between them is Jackie Chan, who does his usual serious acting thing and actually comes off as the best actor in the film. What’s missing from nearly all the characters is a real sense of humanity, though, which really cripples Dragon Blade when it attempts to go for your heart.

The characters might not feel like real people, but the film does do a good job of presenting the budding friendship of Huo An (Jackie Chan) and Lucius (John Cusack). The first hour of the film is almost completely devoted to building this relationship, and when it hits its stride via a bonding/fighting/building montage, my enjoyment of the film was at its height. You gotta love a good montage! It all kind of goes downhill as soon as Tiberius (Adrien Brody) is introduced, even though there’s a lot of fun action that happens during the second half, such as a thrilling chase scene where both the good and bad guys are armed with bow and arrows.

Well… now that I’ve mentioned the action, I guess I’ll have to address it. It’s definitely not up to the quality standards you’ve come to expect from Jackie Chan the choreographer, in fact, the choreography is pretty average. Jackie is given some moments to shine, but the problem is that these moments are truly that, just small glimpses of greatness instead of whole scenes of it. These moments are over before you can even exhale the breath you drew in because you could tell badass Jackie Chan shit was about to go down. The rest of whatever good choreography there was is lost in the poor camerawork and modern editing. It’s the kind of thing you’d see when the actors aren’t actually skilled — but this is Jackie Chan! He’s one of the most skilled performers in the history of film! It’s so frustrating!

With that off my chest, it really should be noted that while the film’s fights are choreographed in an average and forgettable manner, it is “Jackie Chan average,” which is a step above a lot of other mediocre things. It’s still very entertaining, it just lacks that Jackie Chan spark. I guess you could say that about most of his movies from the 2000s on, but this one is more frustrating. What sets Dragon Blade apart is that there is enough “Jackie-ness” to make you salivate, but not enough to satiate. I know he’s getting older, but if he still wants to front movies like this, he’s got to know he’s putting himself in the position to get shit for it. I’d love to see him move into supporting roles like Sammo and Yuen Biao have done, or find a young talent to nurture in a director/choreographer capacity. This hope is given more weight when the best display of martial arts in the film is between a couple of younger supporting characters in a short sparring scene.

Once again, I’ve derailed myself into complaints, and combined they don’t really add up to my general feeling about the movie. I liked it. A lot, even. It just has a lot of problems that can’t be ignored. You can roll with them and have a good time, but they’re always gonna be there. Regardless, I’d rather watch Dragon Blade multiple times in a row than have to see something like The Tuxedo again.