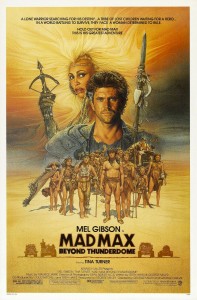 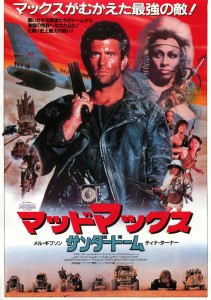 What I find really interesting about this one is the choice by Miller to set it many years after Road Warrior. Like the time jump between Mad Max and Road Warrior, this isn’t expressly stated, but there are many clues. First, Max’s hair is greying a bit. This is the obvious one that’s not worth much discussion. The second indicator is the existence of Barter Town. At some point the bandit clans of the wasteland — a few of them, anyway — must have grown tired of the chaotic ramblin’ life. So instead of living from tent to tent, they set up a town and built it upon the rules of the bandit (Two men enter, one man leaves, etc…). The need for an alternative to gas is also an indicator that time has passed. If the bandits are using alternative fuels, you know that gas is pretty scarce!

The final indicator — or at least the last I noticed (or am remembering) — is the tribe of children living in the wasteland without any context of the old world. This suggests that these kids were living on their own for quite a long time, and they further what Miller started with the Feral Kid in Road Warrior. It’s much more developed in Thunderdome, though, as these kids have built their own warped society based on the artifacts around them and their tales passed down through oral traditions. These kids are blank slates of a sort, with no ability to rebuild the old world. They are the new humans. The only problem is that like many early cultures, they are gullible because of their beliefs, leading them to think Max is their messiah. 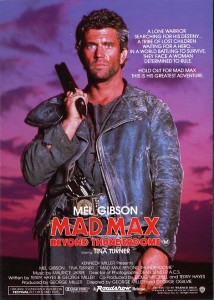 And for their story, Max is essentially their messiah. He educates them and helps them to rise above where their teachings had plateaued. But it’s not just about them. Like the previous films, Mad Max is directly in the middle of two distinct groups. On one side we have the children representing a new hope for the Earth, and on the other side there is Barter Town: the bandits’ (or the bandits’ children’s) attempt at a somewhat civilized society (which is a bastardized, hyper-violent version of the old world). So, basically Max sits between an entirely new world and the continually rebuilt remnants of the old one.

As much as I find all this stuff really engaging, Mad Max Beyond Thunderdome does have an intense lack of action, especially the car action the series is so well-known for. But what is here is really great, especially the Thunderdome battle. Thousands of one-on-one battles have made their way to the screen, but I don’t think any of them have been quite like that Thunderdome battle. It’s intense and exciting in the best ways, and you’ll wish there was a tie-in NES game that you could play after the movie is over. Like the car action in the previous films that defied expectations and wowed audiences with their visual flair, the Thunderdome battle once again solidifies George Miller’s place in the upper echelon of action filmmakers.

If it’s been a while since you’ve seen Mad Max Beyond Thunderdome, give it another shot with all expectations off the table. It’s quite the bold choice to essentially change the franchise’s main genre, and Miller does an exceptional job delivering a more story-driven continuation of the post-apocalyptic wasteland. Now I’m really curious to see how the new film, Mad Max: Fury Road, fits into all this!