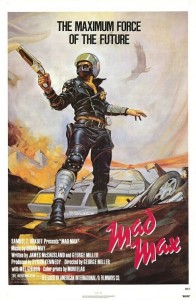 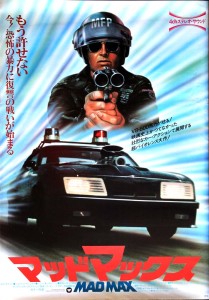 Mad Max ultimately becomes a revenge story, but it’s these societal themes that really drive the film. The revenge is more of a cherry on top to me, and given the odd structure of the film I get the feeling that this was the general idea to begin with. Anyone coming in for a traditional film — especially a traditional revenge film — will be at least somewhat disappointed; it takes like 2/3 of the movie to even get to Max’s impetus for revenge!

So with our sights on the societal aspects: the film opens with “a few years from now…” on-screen, and throughout this re-watch I kept thinking about how this statement could still be true today. If some catastrophic disaster happened and it took out the broad network of technology we use everyday — specifically the Internet and cell phones — we’d immediately be set back to something of a 1980s mentality. With just small groups of people scattered around, there would be virtually no chance to resurrect these pieces of modern infrastructure, so what would we have left? Maybe some electricity here and there, and a whole lot of cars. Roads become places of power and gas is the prized commodity.

I don’t know anything about Australia really, but in America I’ve always felt like at least half the population is about a hair’s breadth away from going completely apeshit lawless, so again, I think this Mad Max scenario is legitimately probable. As a fan of science fiction and how it can extrapolate society’s problems to a future setting, this is what really makes me love Mad Max. After any kind of disaster big enough to completely change the course of humanity, there will definitely be people trying to hold onto the old idea of what life used to be like, but there will also be those who will embrace the new life of chaos that true freedom brings.

The character of Max isn’t especially developed, but because of what he represents within this struggle between the decaying structure of society and the brewing chaos of the new world, I love him. He sits on the line between the two extremes, actively seeing the negative flaws of both. He knows it’s only a matter of time before the police dissolve and the bandits take over, but he knows that raping and murdering isn’t the right way for the world to operate. He’s a good man, but he is ultimately pushed to let his “bandit side” out a bit (which is also exactly what he needs if he wishes to survive in this world). Max tried to fool himself into thinking he could leave this struggle behind by taking his family on vacation, but in this world there is no vacation. You let your guard down and shit happens.

Mad Max is on the shortlist of low-budget films that have achieved widespread international success, and with good reason. It satisfies with fantastic action (which is even more impressive because it is such a low-budget film), and it engages the mind with its depiction of what humanity might become should a major disaster befall us. Most movies are either entertaining or insightful, so for director George Miller to achieve both in his debut is damn impressive. If you haven’t seen it, gas up and go!