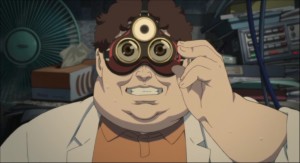 Like Tokyo Godfathers, it is the characters that give this film such an impact. One of the researchers is an extremely overweight nerd, with a childlike joy and curiosity, and while there are plenty of jokes aimed at his weight, it never really feels like the film is being condescending towards him. Satoshi Kon’s films always seem to have this sort of cheerful acceptance of whatever characters he puts in them. Most of the minor characters are less quirky, but still just as likable.

The most intriguing of the characters, though, are the two main characters — as they should be. The first is the lead researcher on the project, Dr. Atsuko Chiba, as straight-laced, no-nonsense a character as possible. She is contrasted with Paprika, a giddy fairy-like woman whose role and connection to Dr. Chiba is never directly explained, which brings me to one of my favorite traits of Kon’s work: his complete confidence to leave things unexplained. He’s perfectly happy to let you figure stuff out for yourself, and if you don’t get it, too bad for you. So taking a cue from him, I’ll just leave the question of Paprika’s nature hanging. 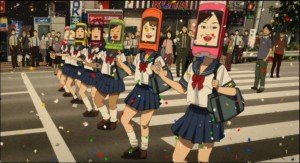 What turns this film on its head is that the dream device doesn’t just affect people who are sleeping; it can even drag fully awake people into their dreams. This gives the film a constant state of never knowing when things are a dream, even more than in most dream-oriented films. As the film goes on, it becomes increasingly difficult to know when the dreams are happening or not. This is pretty normal from the perspective of a realistic scene that might be a dream, but Paprika bends it the other way, too. By the end of the film even the weirdest hallucinatory stuff, like the girls with cell phones for heads or the frog marching band, might actually be as real as anything else.

This is where the fantasy comes in, and looking back, so many of those scenes are left uncertain because of this. One of the major characters is a police detective having trouble with his dreams, and his constant communications with Paprika take place in some kind of chat room, except that it is a physical bar lounge at the same time. It’s a bizarre, surreal location that I would normally just write off as a dream sequence. But in this film, I’m not so sure. Dreams are very real things in this film, and there’s no taking for granted what is happening inside, or outside, of them. 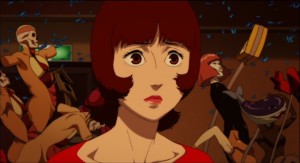 Perhaps my favorite part of the film, though, is the ending. With any dream story it is tempting to end it with the typical “are they still dreaming?” scene, (which was probably the only thing I really didn’t like about Inception) and it’s actually a very hard ending to avoid. Even without such a scene, the question will always be left hanging, even if only in the audience’s mind. But somehow Paprika manages to avoid that question. Subtly and beautifully, it just sidesteps the issue entirely. This may seem odd considering just how much it blurs the lines between dream and reality, but it is actually that very confusion the keeps the ending so grounded. The film reaches a point where the distinction is meaningless, and therefore whether the characters are still dreaming at the end is equally meaningless. Ultimately, Paprika isn’t about the dreams as much as it is about the growth of its characters both in and out of their dreams, and that’s what really matters.

Obviously, as with most Satoshi Kon films, you will have to be willing to dive into the confusing side of cinema, but of course that’s why I like it so much. I think I might prefer Perfect Blue and Millennium Actress a tad bit more, but from a purely technical perspective, I think Paprika edges them out. Honestly the only disappointing aspect of this film is that it is the last thing we will ever see from Satoshi Kon. I jumped into his films without much certainty of whether I would like any of them, but now that I’m done I have to say he earned every bit of his reputation as a fantastic director.