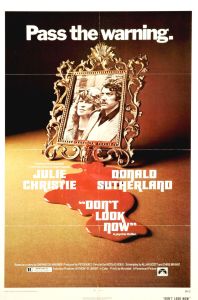 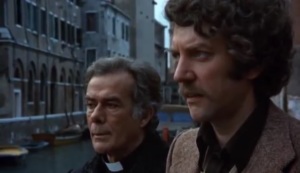 Don’t Look Now is full of these kinds of mental connections made through editing, and it is through them that the film gains much of its power. These ingenious cuts insert us directly into the characters’ minds, and as they delve deeper into their psychological terror, so do we. The inspired editing choices also help Don’t Look Now seem far less aged than it is; the film is still spry 41 years later. A lot of these editing choices are somewhat abstract and a bit unsettling, which paints the perfect mental landscape to experience this story, but I also imagine it distances the movie from a lot of viewers. If there’s a reason that a great movie like this isn’t talked about all that much, this is my guess for why.

What no one can dispute is the foreboding beauty and pervasive power of the film’s location shooting in Venice, Italy. It’s an amazing atmospheric benefit, adding immensely to the old-world terror and visual beauty of the film. The cinematography captures the city’s beautiful aging architecture, as well as its shadowy back allies, to create a perfect mood for the strange occult nature of the story to take root and grow. 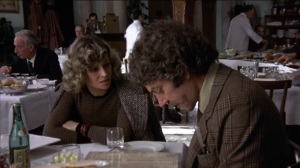 As John and Laura interact with the Venice locals, the Italian dialogue is never subtitled, further adding to the fear of who and what’s just around the corner. It’s clear that John understands and speak some Italian, but Laura seems to be only along for the ride. But regardless, for the most part they are fish out of water and the lack of subtitles showcases this, while also adding yet another element that allows the audience to sink deeper into the mind’s of the characters. Unless you speak Italian, of course! And speaking of Donald Sutherland and Julie Christie, they are absolutely great together. The create an on-screen marriage brimming with passion and reality. They feel like a couple, and their controversial sex scene feels exceptionally raw and shocking for 1973.