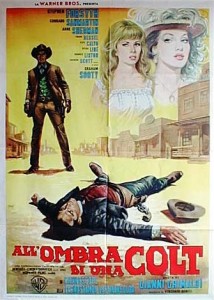 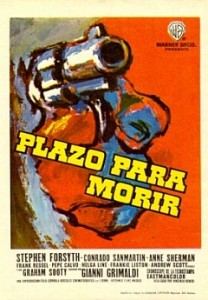 This struggle to leave the lifestyle of a pistelero (as they call themselves in the film) is the main dramatic conflict between our hero Steve Blaine and his friend and mentor Duke. Steve is in love with Duke’s daughter Sarah and wishes to leave the gunslingin’ behind him and start farming with Sarah. Duke won’t allow it and vows to kill him if he tries it.

I’ll stop there as I’m sure you can extrapolate from there the general path the film follows. In a Colt’s Shadow is very well-shot, the widescreen image constantly filled with interesting composition and framing. It’s just shy of being creative or artistic though, so don’t expect something that will rival or excite like a much better Italian director such as Sergio Leone or Sergio Corbucci. But it is well-shot, no doubt, with lots of fantastic examples of moving camera throughout. Director Giovanni Grimaldi also does his best Leone in certain scenes when he wishes to amp the tension up by using skillful editing and intense close-ups. It works well here, but any experienced viewer is unlikely to get the same feeling out of this somewhat watered down version of a master’s technique. In addition to aping Leone, Grimaldi also takes a lot out of John Ford’s playbook, including variations on the famous shot from The Searchers where John Wayne stands silhouetted in front of an open door.

In the great cinematic traditions of old, our hero is an absolute crack shot from any distance, while our bandits are seemingly the worst shots ever to hold a gun, unable to hit the broadside of three barns built side-by-side. Unless it serves the story, naturally. This doesn’t particularly bother me, but I thought I should mention it in case that sort of thing turns you off of a film. It makes for a rousing finale where our hero lays waste to a town full of bandits. Nearly all of them die on a rooftop, which of course means that they fall from heights to their death. I love high-falls and these were some fantastic examples with many of the bandits crashing through balconies on their way down. Ouch! Speaking of shooting, our hero is so badass that he can shoot dudes behind him without even looking back! He does this not once, but twice in the film, just in case you missed how awesome it was the first time around.

I really enjoyed In a Colt’s Shadow, but one of its major faults is the main character/actor. He’s not nearly strong or charismatic enough to carry the picture, just as Grimaldi’s technique isn’t unique enough to distinguish himself from the crowd of Leone imitators. Even beyond Leone’s style, without Clint Eastwood the Dollars trilogy wouldn’t be what it is and Stephen Forsyth just doesn’t have what it takes to be that type of character (based on the evidence seen here). Despite these fatal flaws, there’s enough intrigue, gunfights and devious land owners to make for a fun, if inconsequential, Spaghetti Western. I’d definitely recommend it to genre fans, but not necessarily anyone else.